DUBLIN HAS A long history of urban horse ownership and in some areas it has become part of the culture.

Unfortunately, many horses are being grazed illegally on green spaces or wasteland surrounding housing estates where they encounter many problems, leaving them at risk of injury, disease or lacking suitable nutrition and shelter.

Many of the calls received by the DSPCA, Ireland’s largest and oldest animal welfare organisation, are concerning horses in generally good bodily condition but who are left in areas with little or no visible food and water.

Often these horses are fed inappropriate food such as grass cuttings or bread by the public in an attempt to ‘feed them up’, even though they actually have enough grazing or food in other parts of the fields they are housed in which are not seen from the road.

Many of these cases are passed on to the local authorities who have the legal power to impound the animals when they are on unregistered land, but there are situations where animals who are welfare-compromised are seized by the DSPCA inspectors under the Animal Health and Welfare Act.

One of the most distressing situations which happens frequently is that the DSPCA inspectors are called to cases where dead horses are dumped in laneways and at entrances to disused building sites by owners who refuse to pay for disposal. Unfortunately, few of these animals are microchipped so tracing the culprits is a rare occurrence.

Untraceability makes it difficult to prosecute

It is difficult to calculate exactly how many horses are kept within the Dublin area and this is part of the problem.

Many of the horses are unregulated, with no licence, microchip or equine passport which makes them untraceable to an owner. So if a welfare issue arises, it is often difficult to prove who the owner is and this can then lead to the horses being impounded by the council or seized under the Animal Health and Welfare Act by the DSPCA with a lack of prosecutions.

Another major issue,and one which often goes unnoticed, is the indiscriminate breeding of horses when stallions and young colts are left to run with large groups of mares. This leads to more welfare issues including producing poor quality foals and a general increase in unwanted and uncared for horses.

While there are many owners who look after their horses well, sadly there are many who do not and the welfare of the horse is then at risk, sometimes with fatal results. 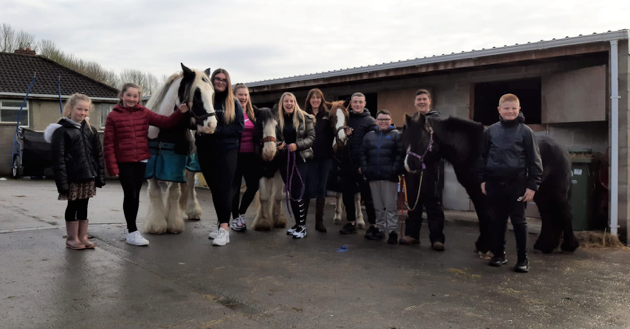 In the past few years, the DSPCA increased resources into addressing the equine welfare problems that are predominant in parts of Dublin.

Many of these equines belong to young people from disadvantaged areas. In some of these areas there is a history of anti-social behaviour leading to long-term problems for the communities. For many young people, the only positive interest that they have is the owning of and caring for their horse.

Education is key to changing attitudes and improving the welfare of the horses.

In an effort to find a long-term solution to the horse welfare issues the DSPCA has put together an Equine Welfare and Outreach Plan. As equine and rehoming manager, my main aim is to work with communities where possible through education and outreach programmes, building partnership in these communities, supporting young people in training and education and even opening career pathways into the equine industry.

Urban horse owners have the passion and the energy to work in this industry but often lack the necessary training and support to transition them from home to a controlled environment that offers proper training.

In the past two years, the DSPCA has worked with young horse owners from Scribblestown, Ballyfermot, Ballymun and Finglas teaching them about responsible horse ownership. As a result of this project, four young people are working towards further training in the equine industry.

There are also equine health and ID clinics where owners can get their horses registered for a passport at a discounted rate.

Owners can get their stallions castrated through DSPCA’s Snip & Chip programme and castration clinics, and the DSPCA is already seeing a reduction in the number of foals born each year and less calls to the DSPCA inspectors regarding the welfare problems associated with stallions running with mares, which often leads to serious injuries for the horses.

We are already seeing positive results from the work carried out as the result of these programmes with horse owners from other parts of Dublin also signing up.

While sadly it is necessary to see horses seized under the Control of Horses Act these figures are reducing over the past few years in the Dublin area and it is hoped that the horse population in Dublin is decreasing.

We expect these measures will lead to a brighter future for both the horse and the owner.

Claire Owens has worked with horses for most of her life. She joined the team at DSPCA in 2018 and since then has fulfilled a lifelong dream to work with horse owners in disadvantaged communities to bring about positive change for horse and owner.

Through Noteworthy, we want to do an in-depth investigation into just how bad the problem of urban horses is across Dublin and whether the local authorities across the city are doing enough to tackle the welfare issues associated with some urban horses.