PRICE INFLATION DOES not pose a significant threat to the Irish economy in the near-term, the ESRI has said, despite Tánaiste Leo Varadkar’s recent remarks.

Last week, Varadkar told the Irish Times, “It’s been so long since we’ve experienced [inflation]that we are overdue.

“We need to prepare for this possibility and interest rates going up as a consequence. I don’t think enough economists are talking about this. With so much quantitative easing, Government borrowing and low interest rates for so long, it has to be on our risk register.” Although economists expect some level of price inflation is expected to return once public health restrictions are loosened and consumer spending picks up once again, inflation is “not a pressing concern”, said ESRI professor Kieran McQuinn.

“Just to reassure the Tánaiste and everybody, there’s always a bunch of economists that are worried about inflation,” McQuinn said.

“Because of the nature of the shutdown and the restrictions; because there’s been a huge fall-off in demand… that has led to disinflation in many items in the traditional basket of goods and services. So, by definition, when consumption rebounds, these items will experience a pickup in prices, there’s no doubt about that.

“But overall, I don’t think inflation is going to be a major issue. Of course, when you are pumping huge amounts of money into the economy as the government is, you always have to have a certain concern about inflation, there’s no doubt about that, but it’s a second-order problem at the present time.”

McQuinn was speaking to reporters at the launch of the think tank’s spring Quarterly Economic Commentary. In the report, ESRI economists forecast consumer prices to rise by a modest 0.7% this year and 1.2% in 2022 following “a marked downward trend in inflation [that]coincided with the pandemic”.

In its latest economic commentary — the think tank’s first since Level 5 restrictions were reintroduced last December — the ESRI said it expects headline Irish growth to maintain its remarkable trajectory from 2020 when Irish gross domestic product (GDP) grew by 3.4%. GDP is expected to expand by a further 4.4% in 2021.

The latest forecasts are based on the assumption that the current restrictions will last until at least 5 April 2021 and “that there will be a gradual easing of restrictions thereafter” followed by a “broad relaxation of public health restrictions in the second half of the year” on foot of a successful vaccine rollout.

Headline growth has been buoyed by the performance of Irish exports — particularly in the booming pharmaceutical and IT sectors; two industries dominated by multinational companies — which improved by 6.2% in 2020 compared to 2019. Irish exports are forecast to grow by a further 7% in 2021.

“Really, the strong performance of the export channel is what stands out, relative to [Ireland’s] peers,” said ESRI Senior Research Officer Conor O’Toole. “That will provide a considerable stimulus to the economy.”

However, on the flip-side, the Covid-adjusted unemployment rate is expected to peak at 25% in the first quarter of 2021 before falling to just over 10% by the end of the year.

McQuinn noted that it will take some time before unemployment gets back to where it was before the pandemic.

“Unemployment can fall quite quickly, and we saw that even last year – at one stage, unemployment was nearly 30% and it came back down to 15% in a matter of months. And we’ve observed that [trend]before this, like in the aftermath of the financial crisis,” McQuinn told The Journal.

“However, while it can come down to quite a low level in quite a quick period of time, then it takes a longer period of time to get right down to around 4.5% or 5%, which we call the natural rate of unemployment in the economy.

“So as a result, we think unemployment will come down to 10% at the end of this year, down to around 6% by the end of next year, and then it will be into 2023 before you’re getting back down to around 4.5 or 5%, where we were in February of last year.”

The pandemic has had a disroportionate impact on younger people, less-well paid people, and part-time workers, as well as people in key sectors such as the arts, tourism, and retail sectors, McQuinn said.

“We call it the dual economy effect – it hit [these people]disproportionately harder than the rest of the population. And one clear indicator of that is the fact that if you look at the income tax take last year, it only fell by 1% compared to the previous year, which is quite remarkable when you think of the scale of the unemployment that we had last year. So that just shows the impact of it on these groups.”

Economists have speculated that the massive increase in Irish household savings could be returned to the economy in the form of a consumer boom once restrictions are eased.

Recent Central Bank of Ireland statistics revealed that in the 12 months to the end of January 2021, Irish household deposits had grown by 13.5% to a record €126.5 billion. With limited opportunities to spend money in households that have not been affected by the job losses and economic downturn caused by the pandemic, households have deposited an extra €15.1 billion over the past year and €1.9 billion in January alone.

ESRI analysis suggests that Ireland experienced had a great increase in savings than its European peers over the past 12 months. 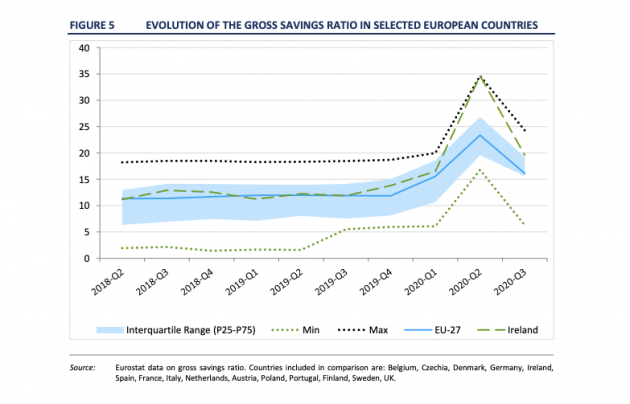 “If households run down excess savings balances when their consumption possibilities are widened, this could provide a natural demand stimulus without policy intervention,” according to the think-tank’s latest economic commentary.

However, there are caveats. Some households may choose to pay down debt rather than spending their savings on consumer items.

Another factor is the income profile of the households in question, O’Toole said.

“For example, if these savings have been accumulated by higher-income households, these households may be less likely to spend for every euro that they earn,” he explained.

So while the impact of the unwound savings on consumer spending might not exactly be “one-to-one”, O’Toole said, “We certainly think that there are savings there that can be used as part of the stimulus.”

Overall, after collapsing by 9% throughout the first pandemic year, private consumption is forecast to recover some of that lost ground in 2021, according to the ESRI, growing by 6.7%.

This represents a downward revision from December’s forecasts when consumer spending was projected to rise by 11% in 2021.

With reporting from Céimin Burke