In these times of political division, Americans on the far ends of the political spectrum often accuse each other of misinformation — but one GOP lawmaker wants CNN and the Washington Post to be officially declared “fake news.” 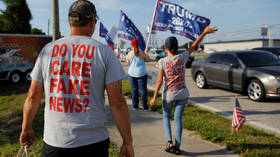 Micah Van Huss, a Republican state lawmaker from Tennessee, has introduced a strongly worded amendment to a resolution in a bid to formally recognize the two left-leaning news outlets as “fake news.” He has accused them of “denigrating” citizens and being part of “the media wing” of the Democratic party.

The measure, which has 13 co-sponsors, replaces a previous joint house resolution filed last month. It states that “fake news outlets suggest ideas without directly making accusations so that they can claim innocence from their ivory towers.”

One of the suggested ideas that has angered Van Huss the most has been that ‘Trumpism’ is akin to a cult. Huss’s amendment accuses the Washington Post of referring to Donald Trump’s supporters as being “cult-like.” It also accuses CNN of suggesting that Trump is using “mind control” to win support.

This has been particularly jarring to Huss, who believes that it is the political left who are the “true masters of deploying mobs to demand total conformity and compliance with their agenda” — an accusation that would undoubtedly be echoed by many on the right who, along with Trump himself, have railed against left-leaning media for years.

The cult-of-Trump meme is in fact a “classic case of psychological projection,” the amendment reads. It adds that the two news outlets are “in a panic” because Trump has “opened the eyes” of ordinary people, who are tired of being “political pawns.” Americans, it says, are also tired of “every other country’s needs being put before their own.”

The amendment concludes by condemning CNN and the Washington Post for “denigrating our citizens and implying that they are weak-minded followers instead of people exercising their rights that our veterans paid for with their blood.”

While Tennessee voters overwhelmingly supported Trump in the 2016 presidential election — and Huss’s resolution will likely be music to the ears of many conservatives — it hasn’t exactly gone down well with everyone.

“I still just cannot believe that instead of actually getting real work done our State Rep sat down and typed out an actual two-page resolution decrying CNN and WAPO as “Fake News”,” he wrote on Facebook.

Needless to say, Huss’s bid also wasn’t received well by left-leaning tweeters, who were quick to point out that Trump’s supporters still had outlets like Fox News, which were more sympathetic to their conservative views.

One branded the resolution an “effort to establish state run media and sanctioned lies.” Others warned Tennessee that it should brace for lawsuits and suggested such a resolution would be “unconstitutional.”

Huss is no stranger to controversy, however. In 2018, he was lambasted for citing satirical website the Onion as a source while speaking to the House Criminal Justice Committee.