The jobs will be available once the construction of its new chip manufacturing factory has been completed.

TECH GIANT INTEL is to create 1,600 new jobs at its plant in Leixlip, once construction of its new chip manufacturing factory has been completed at the campus in Kildare.

The Irish arm of the chip giant, which currently employs 5,000 people here, announced the new hi-tech roles as part of its plans to accelerate investment in Europe, which includes expanding its Irish manufacturing operations.

CEO of Intel Pat Gelsinger outlined the company’s global plans at an online event yesterday evening, revealing that it has invested an additional $7 billion over the past three years on its manufacturing facilities at the Leixlip campus.

“We are accelerating investment in Europe and supporting the EU’s ambition of having 20% of the world’s cutting-edge chips manufactured locally,” said Eamonn Sinnott, Vice President of Manufacturing and Operations and General Manager of Intel Ireland in an editorial on the company’s website.

“This investment is designed to bring Intel’s latest generation 7nm process technology to the region and expand our manufacturing operations. It will also drive economic growth in the region, creating 1,600 permanent high-tech jobs once complete and over 5,000 construction jobs.”

Sinnott added that there will be additional opportunity for investment in the region as Intel plans to announce another phase of expansions within the year. Constriction of the manufacturing fabrication (FAB) facility at its Leixlip plant is expected to be completed within the next two to three years. 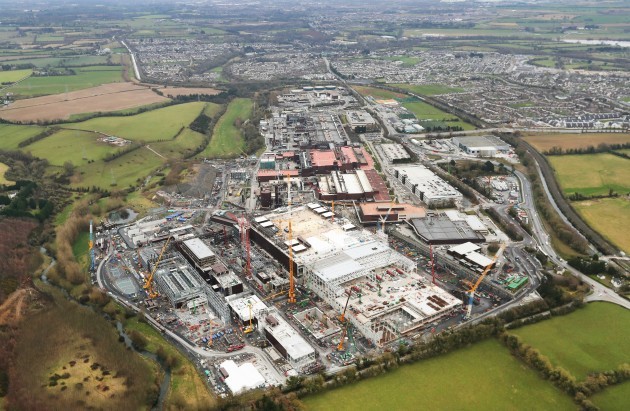 The construction site at Intel in Leixlip

Taoiseach Micheál Martin welcomed the news, saying the company has made an enormous contribution to Ireland:

“Intel’s journey in Ireland has been an extraordinary one and these plans for the next phase of its development will enhance its reputation as a global leader in semiconductor innovation and manufacturing.

Already a substantial employer in Ireland, with some 5,000 employees, these further new jobs will be most welcome. The government’s mission in the coming months and years is to get people back to work and rebuild our economy, while at the same time ensuring Ireland remains well placed to thrive in the new green and digital economy of the future, with high quality, sustainable jobs.

Tánaiste and Minister for Enterprise Leo Varadkar described the investment as another huge vote of confidence in Ireland’s future.

“The company has demonstrated not just longevity and resilience in its 32 years in Ireland but an ambition to continuously innovate and develop. That growth has been of enormous benefit to the entire country,” said Varadkar.