Global airline group IATA says the UK’s decision to make travellers from Spain quarantine for two weeks is a “big setback” that doesn’t accurately reflect the Covid-19 risk in the country, as airline stocks plunged on Monday. 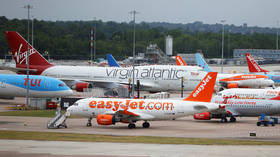 The International Air Transport Association (IATA), whose 290 airlines account for over 80 percent of the world’s air traffic, said the decision was a problem for consumer confidence, which is “essential to drive a recovery” after the coronavirus pandemic left the travel industry struggling.

Britain caused outrage and panic among holidaymakers and tourism companies on Saturday when it announced that people returning from Spain would be forced to quarantine for two weeks. The country had been on the UK’s list of ‘safe’ destinations where quarantine wasn’t required on return to the UK.

“A unilaterally decided blanket quarantine order for everybody returning to the UK from Spain does not accurately reflect the risk of a regional spike in one corner of the country.” the IATA said in an emailed statement.

Foreign Secretary Dominic Raab defended the snap decision on Sunday, saying the government had acted “as swiftly” as possible after learning of a spike in Covid-19 cases in Spain.

The move is a big blow to the travel industry, which is already struggling to deal with the effects of the pandemic. Airline and travel stocks plummeted on Monday, with British Airways owner IAG down 9.5 percent, while easyJet was down 13 percent and Ryanair dropped eight percent.

Ryanair’s CEO Michael O’Leary said the UK’s sharp turnaround was a  “panicked” and “badly-managed overreaction.” The budget airline reported a loss of €185m ($217m) in the first quarter of 2020, after it had to cancel most of its flights from March to June.

British Airways and easyJet both expressed “disappointment” at the call, and Tui, the UK’s biggest tour operator, cancelled all flights to Spain for two weeks.