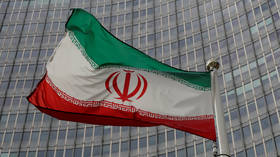 The  International Atomic Energy Agency (IAEA) met on Monday to discuss a report alleging that Tehran is violating the Joint Comprehensive Plan of Action by continuing to enrich uranium beyond the agreed level. Iran claims that the data was supplied by Mossad.

Should the IAEA Board of Governors be taken in by “Israeli fabrications” underlying a recent report that claimed Iran was violating the terms of the 2015 nuclear deal, it would “complicate Iran’s cooperation with the agency,” Foreign Ministry spokesman Abbas Mousavi said during a press briefing on Monday as reported by Tasnim, hinting at a “proportionate reaction.”

They can probably guess what Iran’s reaction will be.

Mousavi called on the IAEA to maintain neutrality instead of acting on “allegations made by the Zionist regime,” citing Israel’s long history of producing unsubstantiated claims about Iran’s nuclear activities and warning the agency against issuing any resolution against Iran in reaction to the report.

The report claimed Iran has “for months blocked inspections at two sites where nuclear activity may have occurred in the past,” continued to build up its uranium stockpile, and upped enrichment levels past the limits set out by the JCPOA nuclear deal. Israel demanded “paralyzing sanctions” be levied on the country in response.

However, Iran only began exceeding the terms of the JCPOA a year after the US unilaterally pulled out and reimposed crippling sanctions in 2018 despite what was at the time full compliance from Iran, and the other signatories have refused to cross the US in order to hold up their ends of the deal.

Iran has rejected all allegations of non-compliance with the IAEA, and Mousavi on Monday called on the agency to base its actions on legal facts rather than the claims of obviously-biased international actors.

Mousavi pointed out that caving in to US and Israeli “pressure” and punishing Iran based on the report’s claims amounts to reopening a probe into “possible military dimensions” of Iran’s nuclear program that was resolved in the country’s favor in 2015. The IAEA at the time concluded Iran had never diverted its peaceful nuclear activities, despite spurious allegations to the contrary.

The spokesman also slammed US threats to extend an arms embargo due to expire in October, pointing out that Washington was no longer a signatory to the JCPOA nuclear deal and thus has no legal standing to extend the prohibition. An extension of the embargo would be a “red line,” he warned.