Nicoline Sorensen scored the decisive goal in the ninth minute at Tallaght Stadium.

AN EARLY GOAL proved decisive in the end, on a night where Ireland put it up to one of Europe’s best sides, opening the next chapter on a positive note.

Vera Pauw’s side produced a battling performance — and showed glimpses of brilliance — in her first international friendly in charge, as they welcomed Denmark to a blustery Tallaght Stadium and preparations were ramped up for the 2023 World Cup qualifying campaign.

Had the crossbar not denied Katie McCabe’s pile-driver in the second half, this one could have been a different story — but had Diane Caldwell not produced two goal-saving clearances, it could have been more than 1-0.

That said, solid foundations were certainly laid ahead of the World Cup draw on 30 April, the qualifiers in September, and in the more short-term, another friendly against Belgium on Sunday — while the disappointment of the last campaign was left behind.

Denmark really showed their class in the first half — Nicoline Sorensen’s ninth-minute goal putting them in the driving seat — but Ireland matched up to them and didn’t look one bit out of place, before driving on in the second.

This was always going to be a tough test for Pauw’s side; Denmark having qualified top of their group to reach Euro 2021, dropping just two points throughout their entire campaign, finishing with nine wins and a draw.

While Ireland — yet to qualify for a major tournament — are 31st, their visitors were ranked 14th in the world, finished second at the last Euros, and have one of the biggest names, and most expensive players, in women’s football in Chelsea superstar Pernille Harder as their captain.

While a lot of their players play close to home, Jamie Finn — named Player of the Match after an industrious display in the middle — was Ireland’s only Women’s National League [WNL] representative in the starting XI. It was a team which showed three changes to their last; Celtic’s Keeva Keenan in for Áine O’Gorman, Megan Connolly starting in place of the ruled-out Ruesha Littlejohn, and Amber Barrett given a chance up top ahead of Rianna Jarrett; setting up nicely with three at the back, and then five as they fell behind.

The Girls In Green started well, playing with intent from the get-go, with Keeva Keenan and Heather Payne linking up nicely down the right. Denise O’Sullivan was industrious as always, getting an early shot on target, but not bothering Lene Christensen.

Through Ireland’s bright start, Denmark looked dangerous from early doors, always explosive and playing with a little more purpose than their hosts. Breaking wide brought them great joy; something Ireland struggled to get a handle off, ultimately coming undone in the ninth minute.

Nicoline Sorensen sent Lars Sondergaard’s side into an early lead, the Everton striker pouncing on Sofie Svava’s deep cross into the penalty area from the left, and squeezing the ball under Moloney.

The Reading ‘keeper bounced back, confident and assured, to easily deny PSG’s Nadia Naim at the front post, while Pauw’s side in general responded well. They got stuck in and created chances; O’Sullivan almost playing Barrett in, only for Christensen to intervene on the edge of the box, and the impressive Payne trying to lob the ‘keeper, but her ambitious effort sailed well over.

Moloney was called to action more and more, punching Signe Bruun’s effort over at the half-hour mark as the Danes threatened, almost everything going through Harder. As half time approached, they pushed for a second; Diane Caldwell clearing the ball off the line after Naim’s lob and Moloney saving another.

While in pursuit of an equaliser though kept at bay by the ever-composed Christensen, Ireland, more vitally, held firm, keeping it 1-0 at the break.

Pauw looked domestically for an injection of energy off the bench, Shelbourne’s Emily Whelan replacing Payne — who presumably picked up a knock in her electric first half — and making immediate impact, firing just over.

While Denmark continued to look in control, Ireland showed more urgency on the restart. Katie McCabe was centimetres away from bagging a simply stunning equaliser in the 53rd minute, the skipper’s rocket of a strike from long-range rattling the crossbar.

There was plenty of needle and niggles from here, as the wind swirled around the ground and Pauw introduced fresh legs in Wexford Youths teenager Ellen Molloy and Rianna Jarrett, formerly of that parish and now at Brighton. Whelan, however, was certainly the most impactful of the substitutes, winning a free on the edge of the box in the 66th minute, which Arsenal ace McCabe pulled across the face of the goal. 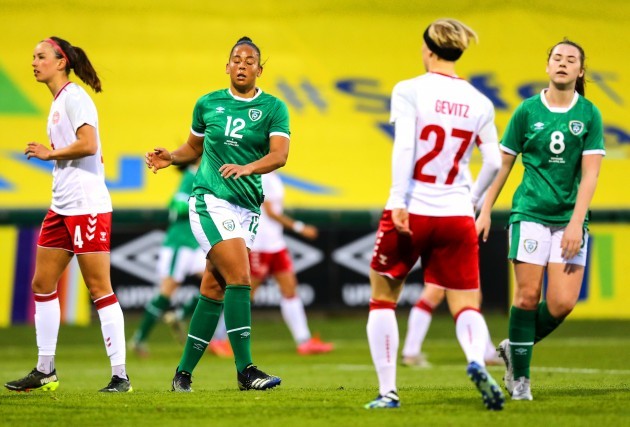 Immediately, at the other end, Moloney stepped up to deny Bruun, as the Danes piled on the pressure, with Sorensen also kept out twice, before Caldwelll, again, produced another superb goal-saving clearance to stop Harder.

Denmark certainly upped the ante and continued to threaten in the closing stages, but Ireland had plans of their own — Louise Quinn sent forward in search of an equaliser.

The visitors looked more likely, however, Harder coming to life after a more frustrating second half with a close-range free-kick and another effort curled just wide.

There were to be a few more Irish chances to cap a productive run-out, none of them materialising, but all positive signs going forward.