Andrew Omobamidele made his first start for Norwich City in their 1-1 draw with Preston North End. 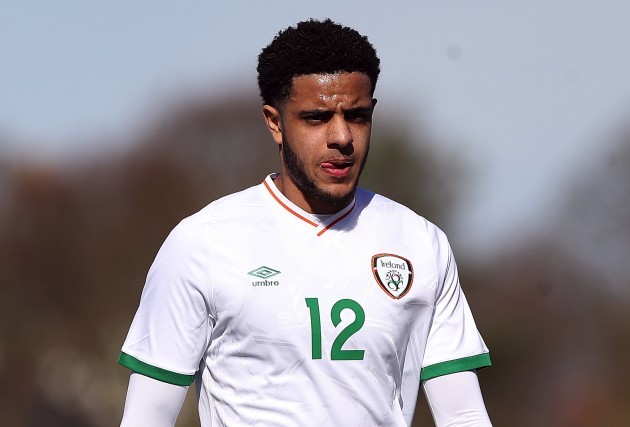 ANDREW OMOBAMIDELE WAS thrilled to make his full debut for Championship leaders Norwich City away to Preston North End on Friday.

Omobamidele started alongside captain Grant Hanley in the centre of the Norwich defence in their 1-1 draw at Deepdale.

It was a first Canaries start for the 18-year-old, whose only previous first-team outing came as a 90th-minute substitute in a 2-1 win at Cardiff City in January.

Omobamidele was unfortunate for Preston’s stoppage-time equaliser, as a Brad Potts strike deflected in off the Irish youngster as he attempted to block.

Despite dropping two points, Norwich retain a sizeable lead as they aim for a swift return to the Premier League. Daniel Farke’s side are six points clear of second-placed Watford with seven games remaining in the 2020-21 Championship campaign.

“The last bit killed us a little bit,” Omobamidele told his club’s official website. “To get a draw like that when we were winning the game and they didn’t have a lot of chances, that’s football. If you switch off and don’t see it out until the referee blows the whistle you’ll get punished. We’ll learn from that.

“I’m a centre-back and my job is to stop goals. It’s a big lesson learned for me. You can get the mentality when you’re winning 1-0 that the referee is going to blow the [full-time] whistle but you need to see it out.”

Omobamidele’s promotion to the starting line-up came a week after he made his U21 debut for the Republic of Ireland in a 2-1 win over Wales in a friendly.

The Leixlip native, who has been on Norwich’s books since he was 16, was rewarded with a new contract last December that keeps him at Carrow Road until the summer of 2024.

“The boys made it easy for me [against Preston], especially Grant [Hanley] talking to me before and during the game to give me a bit of confidence going into it on my first start. I have full trust in them and they’re the best players in the league,” he said.

Making his debut at the age of 18 and fully deserving of today’s Man of the Match award. 👏 pic.twitter.com/VdIh8Acp6y

“It was a great feeling because that’s why you come to the club – to progress through the ranks for moments like these. I was over the moon but I knew the job that needed to be done and I had prepared all week in case I would start. I needed to prepare mentally even though I didn’t know if I was going to start.”

With Ben Gibson ruled out for the rest of the season and Christoph Zimmerman also sidelined through injury, Omobamidele looks likely to be in contention for another start when the Championship leaders host Huddersfield Town tomorrow night.

He added: “I’m going to continue to give 100%. It’s crunch time now coming towards the end of the season so I need to go out and do my job.”