Fighting has broken out along Israel’s northern border with Lebanon, with the Israeli military involved in “ongoing combat” with Hezbollah militants. The Lebanese Hezbollah has denied clashing with the Israelis. 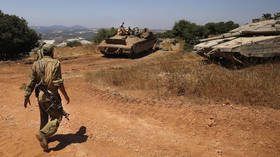 The fighting was first reported by Israel’s N12 TV News on Monday afternoon, with AFP correspondents on both sides of the border claiming to have heard loud explosions. Following the reports, the Israel Defense Forces (IDF) said that Israeli troops were involved in “ongoing combat” in the area.

According to Lebanese sources cited by Reuters, Hezbollah kicked off the exchange by firing a missile at an Israeli military vehicle in the disputed Shebaa Farms area on the border. The IDF then said that it thwarted an attempted border infiltration by an “armed squad,” and that no Israelis were hurt.

However, the IDF has not confirmed the missile attack, and Hezbollah denies that an infiltration attempt was thwarted, and that its forces opened fire on the Israelis. The Shi’ite militia group accused Israel of taking “nervous action” and firing on the Shebaa Farms itself.

Residents near the ‘Blue Line’ – which demarcates the countries’ disputed border based on a withdrawal of Israeli forces in 2000 – were told by the IDF to stay in their homes and avoid open areas. Roads in the area were closed for a short time following the “security incident.”

Though the Lebanese militants supposedly started the exchange, a Lebanese source told Reuters that the attack was itself retaliation for the death of one of Hezbollah’s fighters in Syria last week. The militant was killed in an apparent Israeli airstrike on the outskirts of Damascus. Hezbollah denied this in a statement, but said that its revenge will “definitely come.”

The airstrike angered Hezbollah forces in Lebanon and Syria. In the days that followed, explosions were reported along the Israel-Syria border, and Israel ramped up its military presence along the Lebanese frontier. Despite the military escalation, Hezbollah’s deputy leader said on Sunday that the “atmosphere does not indicate a war… in the next few months.”

Israel and Hezbollah last engaged in open war along the border in 2006, with the month-long conflict killing more than 1,100 Lebanese people and 165 Israelis. Since then, sporadic exchanges of fire have broken out, most recently in September 2019, when the Shi’ite militant group launched a volley of rockets into an Israeli military base. Israel responded with an artillery barrage, and no casualties on either side were confirmed.

With tensions high on Monday afternoon, an IDF spokesman said that “complex and tense days are ahead of us.”