Rhys Ruddock would have loved more game time in the Six Nations.

RHYS RUDDOCK WAITED a long time to get back into an Ireland jersey but his return was frustratingly short-lived.

The 30-year-old started for Ireland against France in round two of the Six Nations after Peter O’Mahony’s red card and suspension, with the Leinster man making his first appearance in green since the 2019 World Cup.

Ireland boss Andy Farrell couldn’t ignore Ruddock’s form for Leinster when he picked his Six Nations squad, but that outing against the French – the back row’s 27th cap – proved to be his final involvement in the championship.

He was still part of the wider Ireland squad as they finished their campaign with three consecutive wins but Ruddock is raring to actually play again now that he’s back in the Leinster set-up preparing for Saturday’s Guinness Pro14 final against Munster.

“Obviously missing out on the Six Nations squad last year, it was a goal of mine to get back in the squad and try and get back in the Irish jersey, so it was nice to achieve that,” says Ruddock.

“I probably would have liked a little bit more game time, but I suppose it’s nice to come back in here [Leinster] and straight away have a chance to fight for a position in the team for some massive games coming up – the final first this week.”

An early lineout steal against the French suggested that Ruddock was set to make a big impact but it was a tough day for Ireland collectively.

The Leinster back row was left out of the Italy game two weekends later and didn’t feature against Scotland or England either. 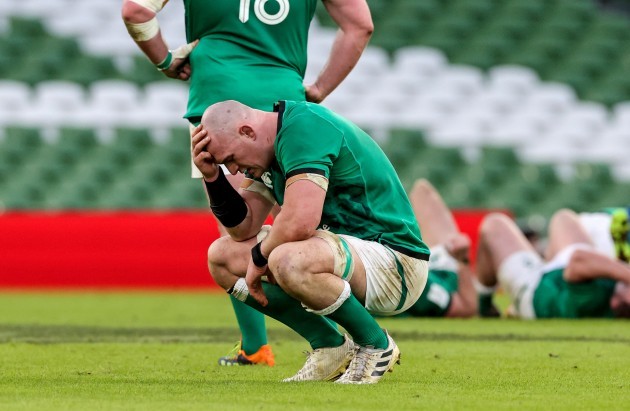 Ruddock after Ireland’s defeat to France.

“There were reasons that they shared with me that I needed to do more of or improve on, but I would prefer… that’s probably between me and the coaches,” says Ruddock of the feedback he got from Farrell and co.

“Look, at the end of the day, there were guys in there doing a brilliant job as well. Tadhg [Beirne] coming in and playing six, playing outstanding, Jack Conan coming in as well.

“It’s just one of those things. It was great to be a part of it. It’s not always as enjoyable when you’re 24th man watching the team and you feel like you want to be out there, but I have to say, the England game, there was no one in the stadium, but all of the reserves who warmed up, there was such a great buzz to see the lads performing so well.

“You could just tell that everyone was on it, so that was actually unbelievable to be a part of, even in that small way. I thought it was a pretty special day.”

Ruddock will be back in a blue shirt this weekend and is eager to pick up where he left off with his province – playing some of his best rugby in years.

Operating at blindside flanker or number eight and often captaining the side, Ruddock has been very impressive for Leinster this season.

He puts his good form down to a tweak in his approach to training – dropping some weight but building more power – and a focus on his self-belief.

“Leading up to when we went into lockdown [last year], I probably wasn’t overly happy with my game in certain areas,” explains Ruddock. 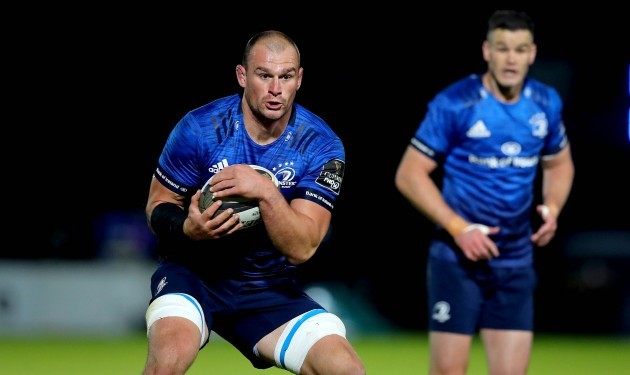 Ruddock has been excellent for Leinster this season.

“One of the main things I wanted to work on was becoming more dynamic and explosive in contact, especially with ball carry, and making more dominant tackles. That’s the kind of player I want to be – physical and a collision winner.

“Then the other side, my confidence wasn’t quite where it needed to be, which I had to work on first.

“The lockdown kind of gave me a chance to do both, to make sure that I was working on that mental side, making sure I was getting my mind right to get as confident as I could be.

“I decided that in order to be more powerful, [I needed to be] be lighter and stronger – I thought the combination of the two, playing lighter but stronger, would make me more dynamic and explosive and then trusting and building confidence on the back of that every time I got stronger.”

Ruddock will hope his hard work pays off again on Saturday as Leinster look to come out on top of an eagerly-anticipated Pro14 final against Munster.

“The intensity of this game is probably going to be at a level that we haven’t faced this season yet,” says Ruddock.

“It’s going to be a massive test but I think we’ve got enough experience in the squad to understand what that’s going to look and feel like on the day, and it’s just about trying to prepare as best we can to face it.”