A CANCER CHARITY, MEDICAL professionals and CervicalCheck officials have welcomed the highest number of cervical smear samples taken since October 2018, after what appears to be a grassroots appeal among women to participate in the programme.

March saw around 29,000 women attending for cervical screening, which is particularly impressive when compared to previous months: in January 2019, around 21,000 people underwent a cervical smear test; in January 2020 that number had fallen to 17,000.

Dr Nóirín Russell, clinical director of the CervicalCheck programme told The Journal that the figures were “reassuring”, after wondering whether women would continue to take part in the vital, free cancer screening programme after a number of controversies.

Though the programme has been found to have broadly the same clinical margin of error as others internationally, public health officials had been concerned at the level of public mistrust towards CervicalCheck – and how low rates of participation could put the continuation of the programme in jeopardy.

“It was really reassuring,” Dr Russell said of March’s numbers. “When you see record attendance, it’s reassuring that women still have confidence and believe that cervical screening is worthwhile.”

In the past few weeks, information has been shared by women on Instagram and Twitter encouraging women to attend their cervical smear test.

Lists of GP clinics offering smear tests under the CervicalCheck programme during Level 5 restrictions have also been shared. (Although some GP clinics are inundated with Covid-19 related queries – and so don’t have the capacity to hold CervicalCheck appointments – others have been able to offer cervical smear appointments.) 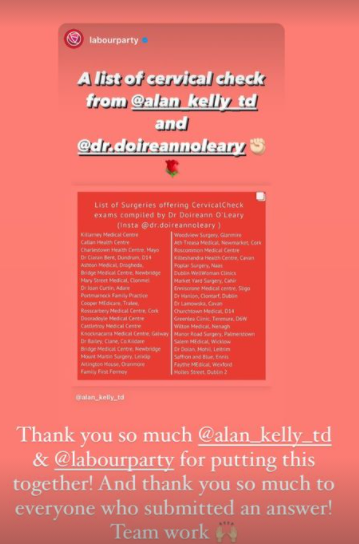 When asked whether the CervicalCheck programme had asked women to share information encouraging people to get screened, Dr Russell said:

“I think that happened organically. It’s back to that point that I think there is an underlying desire for Irish women to have their screening test.”

It was interesting that even with Covid, and everything that was going on, there was kind of a solidarity – nearly like a sisterhood – to say ‘Look, you might be able to get one here’, ‘here’s some practice that is open’.

I could see that on social media, there was a lot of reaching out to each other. If somebody put up a tweet saying ‘I can’t get an appointment’, somebody else would respond to go ‘Listen, you should try here’. I thought that was really positive.

There had been calls at the time from some politicians to publish an official list of GP clinics that were offering smear tests during Level 5 restrictions. But Dr Russell said that because “everything changed so rapidly, and we didn’t want to put out a list that was incorrect”, they felt they couldn’t publish an ‘official’ GP list.

“We were very aware that people’s situations in primary care were changing, usually from day to day,” she said, adding that if the practice nurse was a close contact of a Covid-19 case, that may change that clinic’s appointment capacity for two weeks.

The benefits of cancer screening

A tweet that Dr Russell sent about the increase in women attending for smear tests in March gained significant traction online, which Dr Russell said she didn’t expect.

These figures really do reflect how women are seeing the importance in routine health screening. If you are due your free #CervicalCheck screening, contact one of our clinics where our nurses and doctors are working hard to provide women with their essential healthcare. https://t.co/IRNpTGbDwc

Very positive news, great to see these numbers under the current cloud of covid, may it continue 👏👏#cervicalcheck https://t.co/GeDjUj5tU3

“It’s been a strange couple of years for cervical screening, and it has been one of my fears that women would just completely abandon the CervicalCheck programme. I think that will be really devastating.”

It’s been really interesting to me that there has been such positive reaction to it, because I suppose we kind of worry in the programme whether everything’s on a knife edge… whether the screening will continue – whether women will continue to participate.

She said that there is now a feeling that women are informed about the benefits and limitations of screening, and that this may have contributed to an increase in attendance, which is “telling” that women have chosen to participate, despite the threat of Covid-19.

The benefits of the new cervical screening test, by testing for HPV first, which increases the accuracy in catching dangerous cervical cell abnormalities, has also been a heartening positive for women when considering whether to attend. Screening by cytology first was 75% accurate, while HPV-first screening is 85-90% accurate.

Dr Russell also said that women are aware that if they have had a smear test, but develop symptoms of cervical cancer – such as unusual bleeding or pain after sex – they still need to contact their GP and get checked outside the CervicalCheck programme.

“Women have chosen to really clearly make survival screening a priority for them,” she said, while thanking GPs and practice nurses for taking the time to screen those women during March.

I was really happy when I got the figures. I’m not gonna take it that ‘okay, everything’s fine now, everything sorted’. I think we still have a lot of work to do on relationship building.

The CervicalCheck programme was initially paused on 30 March last year, before resuming on 6 July.

At the start of this year, some GP clinics were too busy under the strain of a third wave to offer cervical smear screening appointments as fast as they had been previously.

Public health officials are recommending that women aged between 25-65 ring up their GP and book a CervicalCheck appointment, even if the date is a number of weeks away.

CervicalCheck is issuing letters of invitation to all participants as their screening date approaches. From 1-26 February this year, around 88,000 invitations and reminder letters were sent; around 21,000 samples were subsequently received from GPs.

It’s feared that the drop in cervical screening will result in an increase in women diagnosed with cervical cancer.

From 2015 to 2017, there were 264 cases of cervical cancer in Ireland per year. Of that number, around 160 women a year are diagnosed via the CervicalCheck programme (around 60% of all diagnoses).

Each year in Ireland, 90 women die of cervical cancer. Without a cervical smear screening programme, the numbers could be twice this: 320 women could be diagnosed, and 180 women could die.