IT BEGAN IN a low-key fashion in Ascot in November 2019 and brought them to yesterday in the city of Ajman in the United Arab Emirates, huddled around a laptop, roaring with a mixture of disbelief and joy as the race unfolded back home at Fairyhouse.

By the close they were celebrating as Skyace, the mare that only required £600 to be shelled out purchase, was first past the post and a Grade 1 winner in a €100,000 Mares’ Novice Hurdle.

Less than a month after finishing fourth at Cheltenham and just under 18 months since trainer John ‘Shark’ Hanlon had bought for the Birdinthehand syndicate, the group which contains members in Ireland and the United Arab Emirates, were left celebrating riotously after this success.

Cathal McHugh won an All-Ireland club medal with Roscommon outfit St Brigid’s back in 2013 and this has been another sporting win to savour.

“The reaction has been off the charts, my phone’s gone through the roof,” said McHugh today.

“There’s great goodwill out there from people. People can just relate to us. It’s something different rather than Gigginstown or Rich Ricci or JP winning.

‘It’s a rags to riches story with the price tag, we’re out in Abu Dhabi and it’s the trainer’s first Grade 1 winner.

“The times we’re in and the horse racing game has been probably under a bit of pressure recently. It just all accumulated into a really good story.

“I’ve loved horse racing my whole life, my father’s been into it. All the lads that are involved, their parents have been into horses.” 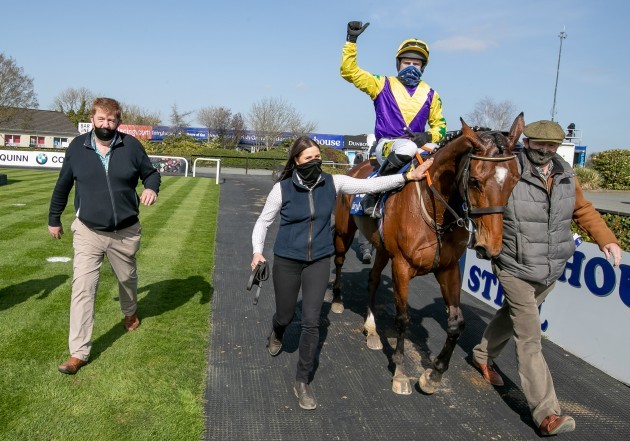 McHugh moved out to Abu Dhabi in 2018 and made friends amongst a new cohort of teachers that had landed there at the same time. His thinking about getting a syndicate going was to have a stake in horse that would run in the summer and he could coincide trips home with races.

Kevin Crean (Wexford) and Kieran Breslin (Donegal) got involved from the Abu Dhabi crew, then Kerril Sutton in Wexford, Mick Delaney in Dublin and Hanlon complete the set with the home interest.

“Myself, Kevin and Kieran became friends out here in Abu Dhabi. Kerrill then is Kevin’s friend, and Mick then is myself and Shark’s friend.

“She started off in a poor maiden and we didn’t think she was going to win and no one had a penny on her at all. She surprised the whole lot of us, we realised she was a good horse. It’s just excitement watching her. She runs her heart out.

“I didn’t think she jumped that well through the race yesterday. She normally is a great jumper. I wasn’t comfortable and then she nearly got ran out then three or four furlongs out. I was more on edge for that race than normal.”

If it was a nerve-wracking experience to watch, that soon switched to delight after aand they absorbed the volume of well wishes after this triumph.

“The boys that own Flooring Porter (Cheltenham Stayers’ Hurdle winner) are only up the road from me. So South Roscommon has two Grade 1 winning horses now.

“Down in Wexford which is big racing country, everyone’s talking about Skyace. Then out in Abu Dhabi, people are gone daft into horses. There’s another five or six syndicates set up from Abu Dhabi boys out here just since Skyace.

“There’s massive excitement. There could have been two hundred people in Victors Bar (in Dubai) for Skyace’s race in Cheltenham. Then we were in McGettigans Bar in Ajman yesterday, and I’d say there were 50 or 60 people on holidays that just made their business to be where we were for the race. There’s a lot of interest in her.

“It’s just been magical in terms of how it’s brought communities together.”

There’s been a natural frustration at never being an eye-witness in the race or seeing Skyace in the flesh. It’s two years since McHugh has been home, another statistic to illustrate how Covid has derailed people’s plans.

But the syndicate members abroad have been grateful for their trainer keeping them in the loop from afar.

“He (Shark Hanlon) is great craic. Any of the lads could call to his yard to look at the horse pre-Covid. Since that came he’s been great for videos and voicenotes, just giving us really good updates in terms of what’s happening. He knows how to work syndicates and is able to train horses to win too which helps.”

McHugh had a previous connection with the trainer. He was operating on the Roscommon squad in 2016 when a group of the county senior footballers, draw from his St Brigid’s club and nearby Padraig Pearses, had Smadynium in training with Hanlon.

The high point was the couple of wins at the end of the year in Fairyhouse and Clonmel, piloted by the star of the show at Cheltenham last month.

“We won the Ladies’ Handicap Steeplechase in Fairyhouse, Rachael Blackmore rode for us then and we’d still be in good contact. She was one of the first to message yesterday congratulating us.

“Funny enough I text her after she’d won her few winners in Cheltenham and said she’d won enough that week but she went on to beat us anyway (on Telmesomethinggirl). It was a bit of craic.

“It’s great seeing what she’s gone on to do, she’s top notch.” 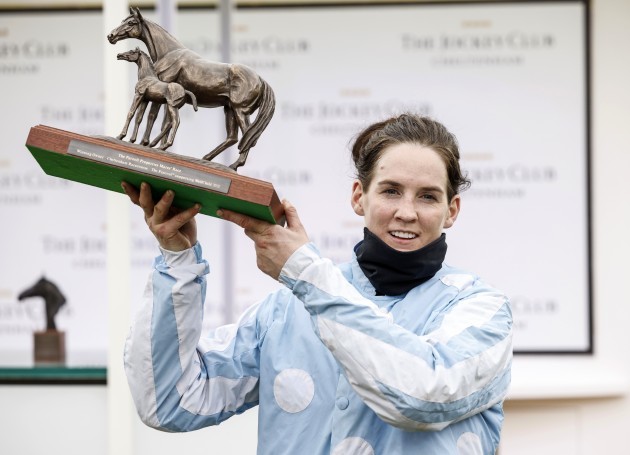 Rachael Blackmore celebrates after winning with Telmesomethinggirl at Cheltenham.

Consecutive wins at Down Royal and Punchestown late last year spiked their hopes after a previous lull in form. Skyace’s improvement exploded from the Down Royal run. The plan mapped out for the spring campaign paid off with the break until Cheltenham and then a short respite before Fairyhouse.

“We knew going to Cheltenham that two miles is a bit short for her,” says McHugh.

“We were giving five pounds to everything. The last horse to come in the top six giving top weight was Laurina was about six years ago. So we knew what we were up against.

“The trainer rang me on Saturday morning and just said, ‘This horse won’t be beaten tomorrow.’

Not sure I’ve ever read such bullish quotes from a trainer before a Grade 1. He wasn’t wrong. pic.twitter.com/GfhlQizRoT

The faith was rewarded in brilliant fashion. It’s a changed sporting environment from one that McHugh previously inhabited, part of a club team who dominated the Roscommon football scene, emerged as a main player in Connacht while featuring in two All-Ireland finals, defeating a star-studded Ballymun Kickhams team in 2013. 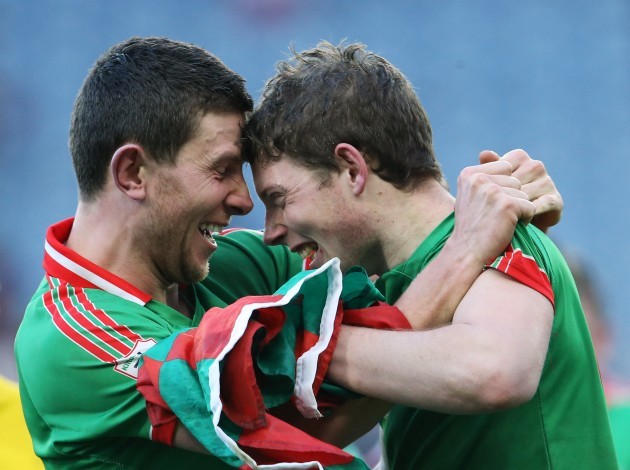 “I left in 2018 when I was coming to end of my career, not in terms of age but I just felt I was getting too many injuries. I was getting a bit frustrated then, my levels of performance had probably dipped because of that and I felt it was time to move on.

“Let the younger lads and they’re not doing a bad job, it was great to see them win the county last year. In fairness nearly the whole club sent me messages and wishing us luck in the last two days.”

“It’s different when I was playing, you had to go train and be dedicated to it all. Here it’s just a journey, it’s Shark in the yard and Jody (McGarvey, the jockey) that are doing the hard work.

“The staff that look after her, we’d be very appreciative of their work as well, especially Ciara who looks after her and Shane Fenlon who rides her out. We’re the lucky ones, we just got a cheap horse at the time when we were willing to put a few pound into it.” 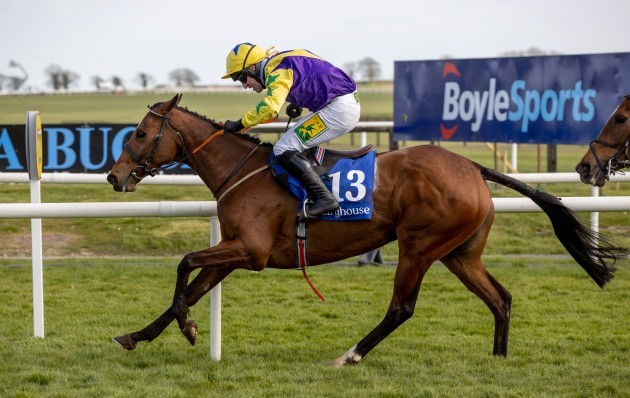 When they will ever get to see their hero in action is tricky to forecast.

“Our regulations aren’t as tight as they are in Ireland. We’re all getting vaccinated, I’d say 90% of the people that were there watching yesterday have the first dose of vaccinations.

“We’re able to go out and have a few drinks, we were playing golf today. So it’s different over here and you hear stories from friends finding it tough at home. We’re fortunate.”