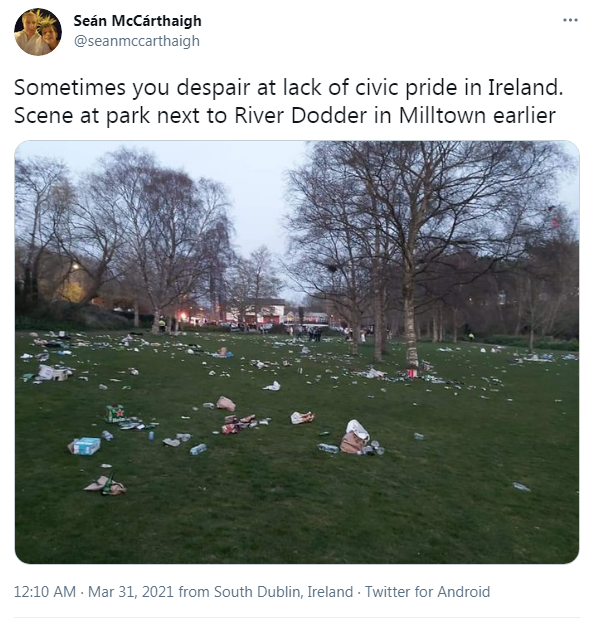 DUBLIN CITY COUNCIL has said it is carrying out a “comprehensive” street cleaning operation in response to a rise in littering across the city in recent days.

Images shared on social media this week showed green spaces filled with rubbish left behind by people enjoying the warm weather, with one image of a park in south Dublin causing a stir online.

Councillors who spoke to The Journal suggested that a recent increase in visible waste is a “natural consequence” of the good weather and the Covid-19 pandemic.

Green Party councillor Claire Byrne described the increase in litter in parks and along canals in the south inner city as a huge problem.

“This is a big issue, not just in Dublin but across the whole country,” she said.

“I think it’s a combination of more people gathering outdoors – because they can only meet outside – for significantly longer periods of time, and us not having the sufficient infrastructure in place to deal with that.

“We’re putting massive investments into adapting to a more outdoor lifestyle as a result of the pandemic, but the management of litter has to form part of that picture.”

Byrne also suggested that the problem is as much to do with the behaviour of individuals as it is about how the council manages littering.

“We’re now in a space where everything’s a takeaway culture and the pandemic has forced us to end up with an increase in that kind of waste,” she added.

“But it also comes down to the personal responsibility side of things. Is it ever acceptable to just stand up and walk away from the waste that you’ve created? No, it’s not.”

One image sent to The Journal also showed waste left behind in Albert College Park beside Dublin City University in Ballymun, including cans and boxes of beer bottles. 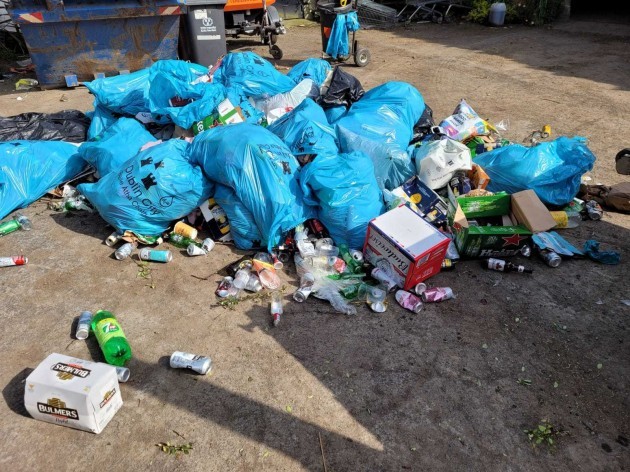 Local Social Democrats councillor Mary Callaghan explained the destination was particularly popular among locals who wanted to enjoy the outdoors.

She said that although it was important that people got to exercise, she had noticed a general increase in littering all over the city.

“It’s kind of a natural consequence of people being out walking and exercising, and of people needing to get out and get some fresh air,” Callaghan said.

However, she added that the council had been responsive to her requests to clean up litter in the area.

Asked about the recent rise in visible litter around the city, a spokesperson for Dublin City Council said that the local authority’s waste management unit currently has a “comprehensive street cleaning service” in operation.

It further said that litter picking and sweeping was being carried out in areas of high footfall every day and that additional bins had been introduced to manage waste in high demand areas, including Clontarf, Portobello and Cross Guns Bridge in Phibsborough.

“This is under constant review and additional capacity will be introduced if required,” the council added.