Researchers who sifted through human saliva, animal feces, and various water sources have found hundreds of giant viruses with unique abilities we’ve never seen before, blurring the definition of what it means to be alive. 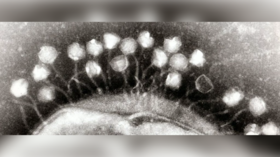 The international team, led by scientists from University of California, Berkeley discovered this new class of giant phages (viruses that infect bacteria) that can have almost four times the number of genomes typically found in phages, with some reaching as much as 15 times normal size, with 735,000 bases of DNA.

Not only are they massive but these giant viruses are also advanced (relatively speaking) as they also boast the cellular machinery that reads and executes DNA instructions to build proteins, also known as translation. This particular ability throws into question our current understanding of both viruses and indeed our scientific definition of ‘life’ itself.

“Typically, what separates life from non-life is to have ribosomes and the ability to do translation; that is one of the major defining features that separates viruses and bacteria, non-life and life,” said microbial ecologist Rohan Sachdeva from UC Berkeley.

“Some large phages have a lot of this translational machinery, so they are blurring the line a bit.”

These phages are so advanced in fact, that they inject target bacteria, hijack their gene-building equipment and mass produce copies of themselves. They also use this equipment to fend off competing phages looking to hijack the same bacterium.

“Since we have both harmful and useful bacteria living on us and within us, understanding what kinds of phages coexist with them in humans and animals and how they affect those environments is of great value.”

The implications of this discovery are far-reaching both in the scientific study of viruses but also for people’s own physical and mental health and the microbiomes in their guts.

Better understanding of the systems these phages possess could eventually help to better control human microbiomes which could revolutionize certain fields of medicine and the treatment of as yet incurable diseases.