Standing outside her home in Miziara, Lebanon, Souha’s eyes fill up with tears as she speaks about her husband’s death. “I love you!” she cries out, as if speaking to him. 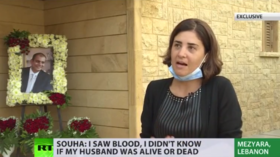 “How am I able to come back to this house? How am I supposed to put my head on this pillow, in this room, and I know it’s forever, his body won’t be around me. I was waiting for him to hug me, just to put his arms [around me], to feel secure,” she told RT’s Igor Zhdanov.

Souha’s husband, Jihad, was one of the more than two hundred victims in last week’s catastrophic blast that left much of the Lebanese capital in ruins.

When the explosion tore through Beirut, she, along with her husband, was with their daughter, Jemma, at the hospital. The six-year-old was receiving medical treatment after being diagnosed with Hodgkin lymphoma. Jihad had rushed back to Lebanon from a business trip in Nigeria so that he could be with his daughter as she battled cancer. Souha said that the three of them shared the same bed at the hospital, so that Jemma would never feel alone.