A Portland jeweler whose store was ransacked amid ongoing protests has lashed out at local officials, saying they have failed to adequately respond to looting and that, as a result, the city has changed for the worse. 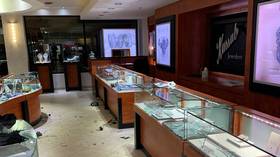 Noha Kassab’s family-owned business lost nearly $1 million in merchandise after a mob broke into her store on May 31. In an interview with RT, Kassab, whose jewelry store has been a fixture in downtown Portland for more than three decades, said that she no longer recognizes the city.

The city “looks like a warzone,” the jeweler said, adding that she was uncertain about the future of downtown Portland.

Kassab expressed frustration over the city’s unwillingness to bring an end to the unrest, claiming that local officials have shown “failed leadership.” She has yet to be contacted by Portland officials over what happened to her store.

On July 7, more than a month after Kassab’s store was burglarized, Portland police published photographs of suspects and asked the public to help identify them.

The business owner stressed that, while she fully supported the right to peacefully protest, there is no justification for looting and the destruction of property.

“That is completely different than protesting,” Kassab told RT. She noted that the police had the difficult task of protecting the city from further lawlessness.

It’s not safe to be in downtown Portland, and I feel bad for law enforcement right now because they have a big job to do. And Portland is a mess right now.

The city has become a flashpoint for the Black Lives Matter movement. For nearly two months, demonstrators have been clashing with police outside the city’s federal courthouse. The arrival of federal agents charged with protecting the building has led to accusations of unlawful “kidnappings” and other tactics. In turn, demonstrators have become increasingly violent. Last week a mob broke into the office of the Portland Police Union and lit a fire.