After Joy Behar, co-host of US talk show ‘The View’, announced she has no intention of taking a Covid-19 vaccine before Ivanka Trump does, the president’s eldest daughter promptly offered to take it live on air. 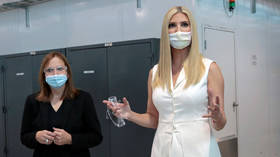 Criticizing Donald Trump for claiming a vaccine could be ready in the US very soon, Behar said he is simply trying to get “reelected.”

“He will push anything to get reelected. Don’t fall for it,” she said on Wednesday. “And by the way, I will take the vaccine after Ivanka takes it.”

Ivanka Trump responded directly to the challenge on Thursday, tweeting, “Deal @JoyVBehar. I would come on your show to do so.” She added that she “trusts” the FDA (Food and Drug Administration) and “so should all Americans.”

Deal @JoyVBehar. I would come on your show to do so.I trust the FDA and so should all Americans. Vanquishing this virus should be our collective top priority. https://t.co/FXb0Dqjdio

While most reactions to Trump’s offer have been slams against her and her father, she was offered some support by her brother, Donald Trump Jr, among others.

“Call me, I’ll help you prep for the interview @IvankaTrump…Joy, Whoopi and the rest of The View ladies love me,” he tweeted, referring to his fiery appearance on the show last year which devolved into shouting matches.

Call me, I’ll help you prep for the interview @IvankaTrump…Joy, Whoopi and the rest of The View ladies love me. 😉🤣 https://t.co/u056gc9bWd

The vaccine that Ivanka will be taking on the View is a mixture of Goya Bean soup, water from Lake Travis, A McDonald’s Shamrock Shake and the pen ink used to write letters to Kim Jong Un. It’s already passed phase 3 deflection trials.

You’re not a doctor, Ivanka. Nobody cares about your opinion of vaccines.

Trump declared this week that a Covid-19 vaccine could be ready by October and will be “very safe and effective.” Critics have pushed back against his claim, citing a rushed process as a reason to be distrustful of the efficacy of any such vaccine.

“As far as the vaccine is concerned, I’d like to inform America, in case we don’t know this because I looked all this up for you, the mumps vaccine took four years, the polio vaccine took 20 years and the smallpox vaccine took a few centuries,” Behar said on Wednesday.

Trump himself has offered to take the vaccine “first or last.”

“Well, you know the way it works. If I’m the first one they’ll say ‘He’s so selfish. He wanted to get the vaccine first. Then other people would say ‘Hey, that’s a very brave thing to do,’” he told Fox News in July.

“I would absolutely, if they wanted me to and thought it was right, I’d take it first or I’d take it last,” he added.