The UK PM was accused of contributing to the toxic environment through “mistruths” regarding Brexit regulations.

UK PRIME MINISTER Boris Johnson is being accused of showing a “total disinterest” in Northern Ireland amid several consecutive nights of violence by loyalist protesters that has left dozens of police officers injured.

He accused the Conservative of significantly contributing to the toxic environment in Northern Ireland through “mistruths” regarding Brexit regulations.

“41 police officers have been injured in seven consecutive nights of violence. If this was happening in Durham or Leeds, there would be COBRA meetings, emergency resource allocations and senior politicians would be tripping over themselves to get involved,” Eastwood said.

But when it’s Derry or Newtownabbey, the British Government appears happy to ignore it.

“The silence of Boris Johnson, in particular, is galling. The British Prime Minister’s policy of lying about the impact of economic and regulatory borders in Northern Ireland has contributed, in a significant way, to the toxic political environment that has created space for young people in working class communities to be manipulated by paramilitary groups,” he said. 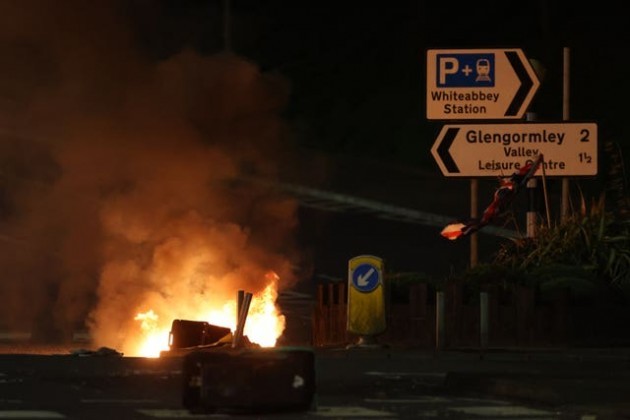 Bins are set ablaze at the Cloughfern roundabout in Newtownabbey.

Loyalist communities, in particular, clearly feel an immense sense of betrayal. The least Johnson can do is address those concerns.

Tensions have soared within the loyalist community in recent months over post-Brexit trading arrangements, which it is claimed have created barriers between Northern Ireland and the rest of the UK.

All the main unionist parties have demanded the resignation of PSNI Chief Constable Simon Byrne, claiming he has lost the confidence of their community.

The Stormont Assembly is set to be recalled tomorrow morning for an emergency debate following the violence.

With reporting by Press Association