Judge Amy Coney Barrett, picked by President Donald Trump for the US Supreme Court, has said a judge’s policy views must play no role in their decisions ahead of what is expected to be a highly-politicized confirmation process. 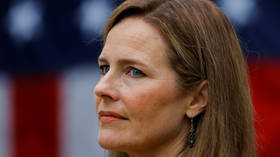 Speaking alongside Trump in the Rose Garden, minutes after he officially tapped her to fill the SCOTUS seat left vacant by the death of Justice Ruth Bader Ginsburg, Barrett reaffirmed her commitment to the judicial philosophy of her mentor, former Supreme Court Justice Antonin Scalia.

“I clerked for Justice Scalia more than twenty years ago, but the lessons I’ve learnt still resonate. His judicial philosophy is mine too: A judge must apply the law as written,” Barret said.

While saying that she continues to be guided by Scalia, she also mentioned the friendship the late judge had with Ginsburg, noting that it proves that sharp difference of opinion “need not destroy personal affection.”

Paying tribute to Ginsburg, Barrett hailed her as the woman who “smashed glass ceilings” and “won admiration” of her colleagues, noting that her passing “marks the end of great American life.”

Even before she was officially nominated, Barrett’s candidature came under fierce scrutiny from both Trump’s political opponents in the Democratic Party and conservatives.

The former questioned Barret’s Catholic beliefs, expressing concerns that she might help to overturn Roe v. Wade, which safeguards the right to abortion. Barrett has never ruled directly on an abortion case, but in a 2013 Texas Law Review article referring to seven “super-precedents” — cases that the court should never consider overturning — she excluded Roe vs. Wade, the landmark 1973 ruling that protected a pregnant woman’s right to choose. However, Barrett herself indicated that she does want to dismantle the landmark law, saying in 2016 that she does not believe “that would change.” At the same time, she said that there can be more restrictions placed on clinics that facilitate late-term abortions.

Democrats also took her to task over her signing a 2012 letter criticizing an Obamacare requirement that forced all employer-provided health insurance plans to cover contraception.

Her personal religious beliefs also came into the picture back in 2017, when Trump nominated her to the 7th US Circuit Court. Senator Dianne Feinstein doubted Barrett’s impartiality, saying that “dogma lives loudly within you.”

While it’s expected that Barrett’s confirmation process might see Democrats and Republicans locking horns just as they did over the confirmation saga of Justice Brett Kavanaugh in 2018, Trump sought to assure those gathered in the Rose Garden, that the road would not be that bumpy this time.

“Thank You Senators for being here today. This will be easier than what you think!” he said.