The debate between VP Mike Pence and Kamala Harris went largely as expected, to such an extent that the appearance of a fly and online trolling by would-be presidential candidate Kanye West stole the spotlight on Twitter. 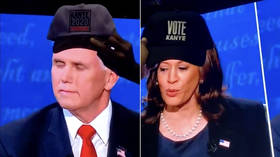 The fly was immediately seized upon by many on both sides of the aisle as a bit of light relief from the somewhat humdrum affair. However, dubious pretender to the Oval Office Kanye West set off a wave of mockery of the vice presidential candidates online with his own bizarre video posted to Twitter.

They had to get the merch first https://t.co/8gBTw6g6Jqpic.twitter.com/6R0aJ6YGjJ

In the video someone (presumably West) can be seen holding ‘Vote Kanye’ and ‘Kanye 2020’ baseball hats over the politicians heads while watching the debate on an enormous screen.

Naturally, the crossover meme everyone was waiting for didn’t take long to materialise.

Damn even the fly was rocking the merch pic.twitter.com/K2K2Q5UNZJ

On social media some speculated that the hats were a means to inject a bit of cash into his faltering political campaign through merch sales. Many also pointed out that West would have made a welcome addition to proceedings during the vice presidential debate.

Shit he should be the next moderator.

Kanye I love you but these prices killing me dawg pic.twitter.com/5Om1UMjIwI

West announced his bid for the White House on July 4, but his campaign has floundered several times due to mental health issues and, most recently, a reported Covid-19 infection.

His name will appear on ballots in 11 states, at a cost of $7 million, but he has been accused of running a spoiler campaign to take votes away from Democratic candidate Joe Biden.