Keeping international borders shut for too long over Covid-19 would hardly be possible, according to the World Health Organization. Its statement comes as virus spikes in some countries spark fears of a second wave. 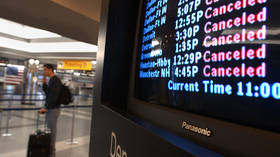 The basic protective measures remain wearing masks and keeping social distancing, WHO’s Director General Tedros Adhanom Ghebreyesus pointed out. He praised Canada, China, Germany and South Korea for their significant achievements in countering the epidemic due to strict adherence to the rules.

Meanwhile, another WHO official sees it as extremely hard to keep the world hermetically sealed for much longer.

“It is going to be almost impossible for individual countries to keep their borders shut for the foreseeable future,” WHO’s emergencies program head Mike Ryan said.

Economies have to open up, people have to work, trade has to resume.

The officials made their statements after the British government reintroduced 14-day quarantine for travelers returning to the UK from Spain.

A recent surge in new cases of Covid-19 was behind the London’s hasty decision to remove the country from the safe list.

Over the weekend, British authorities reimposed – with no advanced warning – quarantine requirements for tourists returning from Spain. The unexpected change caused chaos in British airports and unease among returning holidaymakers. The government, however, said it was in the right as it has to react swiftly to emerging risks.

After brief relief in mid-summer, many countries are considering re-imposing stricter anti-virus protection policies as the number of confirmed cases has again surged in recent weeks around the world.

The EU decided to lift travel restrictions for 15 non-EU nations from July 1. China was marked as safe, while countries like Russia, US, India and Brazil – all recording thousands of new infections daily – were excluded.

States outside the European Union are also not always rushing to open their borders. Russia, for its part has so far allowed air travel abroad only to the UK, Turkey and Tanzania (starting from August 1).