The Leinster flanker will hope to show his quality against Toulon tomorrow.

IT HAS BEEN impossible to miss the extra bit of bite in Josh van der Flier’s play in recent weeks.

Missing out on two Ireland games in a row – the wins over Italy and Scotland – certainly brought another little spurt of aggression and energy into the Leinster man’s relentless approach.

His strip on Billy Vunipola was a highlight upon his return to Ireland’s number seven shirt for the win over England, while van der Flier has been carrying the ball with more impact than ever in recent games for his province.

It was very noticeable again last weekend as Leinster beat Munster for their fourth consecutive Pro14 title, with van der Flier punching onto the ball with real impact on his seven carries, one of which ended with his offloading to Hugo Keenan for a big linebreak that they really should have turned into a try.

Van der Flier has never really been known as a big ball-carrier but he explains that he has been working on it with Leinster coaches Stuart Lancaster, Robin McBryde, and Hugh Hogan.

“It’s something I’ve looked to try to improve,” explains the 27-year-old. “I had a good chat with Stuart and Robin about my ball-carrying and things I can improve.

“I’ve been trying to get on the ball a bit more. Sometimes I can find myself hitting a lot of rucks and I suppose it’s looking to get myself into that position of being a main ball-carrier.

“I mean, I’d be happy enough being an outside option for someone or running lines out in the backline but it’s been good to get some ball in hand and it’s something I’ve been working on as well as with Hugh Hogan.

“Running onto the ball and trying to be as powerful as I can is something I continue to work on, it’s definitely something I can get better at. It’s been a focus and it’s been great to get some carries under my belt as well.” 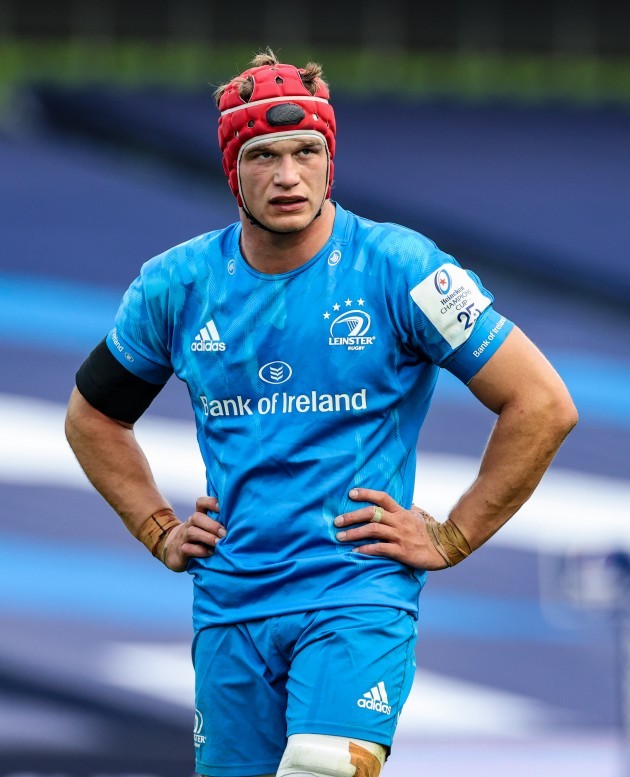 “Paul mentioned it as something that had gone well for me throughout the season and he said to keep working on that side of the game,” says van der Flier.

“Something Paulie had focused on with us was working on our strengths because you can get into habits of always looking at what you didn’t do well and working on that. He was very much driving that if you are good at tackling, then work on your tackling and try to be the best that you can on those kind of things.

“So we had a bit of a chat around ball carrying, with John Fogarty as well. We had a few good discussions on different ways to carry and how I could improve my game. That was something I worked on throughout camp as well.”

Van der Flier will hope to make an impact again tomorrow as Leinster go up against French side Toulon at the RDS in the last 16 of the Champions Cup.

With stars like France captain Charles Ollivon and former Italy skipper Sergio Parisse up front, as well as international halfbacks in Baptiste Serin and Louis Carbonel, Toulon will bring some firepower with them.

But having been knocked out by Saracens in the quarter-finals last season, Leinster are up for this one.

“Everyone is very, very motivated,” says van der Flier. “Something we talk about a bit is learning from past losses and Saracens would certainly be one that would be in our thoughts in terms of how we prepare.

“We need to prepare as well as we can, especially against a side as good as Toulon. They are a world-class side, they have some incredible individuals.

“From looking at them so far, their individual strengths, they’re a pretty impressive outfit so it will definitely be a big challenge but the motivation is more than there.”