A new poll by the Cato Institute shows 62 percent of Americans feel they must censor themselves from openly expressing their political views, in some cases out of fear of losing their jobs or missing career opportunities. 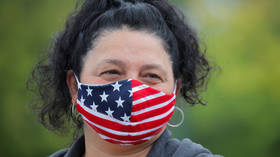 The fear is especially common among conservative respondents, 77 percent of whom agreed that the current political climate prevents them from saying things they believe. This week’s study showed that even among centrist liberals, 52 percent said they must censor their opinions. That compared with 45 percent in 2017, the last time the same poll was done. Back then, 57 percent of moderates said they couldn’t openly express their views. This year, 64 percent of moderates are self-censoring.

Only strong liberals feel at liberty in the current political climate to say what they think, though the portion who fear speaking openly increased to 42 percent in 2020 from 30 percent in 2017.

The report reveals a jarring phenomenon in a country that was founded with freedom of speech as the first God-given right enshrined in its Constitution. And the breakdown of the results corroborates the view that only far-left views are tolerated in today’s society. It’s not only staunch conservatives who are being targeted by cancel culture, as evidenced by the resignations this month of New York Magazine columnist Andrew Sullivan and New York Times opinion writer Bari Weiss.

Consider that the New York Times stood by its August 2018 hiring of Sarah Jeong to its editorial board, even after it came to light that she had posted racist, anti-white messages on social media, but Weiss was compelled to quit because she said she was bullied by co-workers for being a political “centrist.”

The Cato report also suggests there may be some truth to the theory that many Trump supporters are afraid to tell pollsters that they will vote to re-elect the president. Former Trump press secretary Sean Spicer last month cited a Democracy Institute in America poll showing that 37 percent of Trump supporters would want their friends and family to know how they vote, while 74 percent of Biden backers would be comfortable with their votes being known.

Crucial takeaway in new poll showing why polls will continue to be an issue:”only 37 % of @realDonaldTrump voters would want their friends and family to know how they had voted while 74 % of @JoeBiden supporters are comfortable with it being known, https://t.co/ikK1f5OEnT