The southern province must now turn their attention to the visit of Toulouse.

WITH TOULOUSE COMING to town on Saturday, there hasn’t been much time for Munster to lick their wounds.

Losing at home in Thomond Park this weekend would see Munster knocked out of the Champions Cup and leave them with only the Rainbow Cup – still not confirmed in its entirety – to play for this season.

So one can understand the southern province taking the positives out of their Guinness Pro14 final loss to Leinster. While it must be presumed that Munster were brutally honest and clinical in their in-house review of the game, senior coach Stephen Larkham was intent on painting a rather rosy picture during yesterday’s media duties.

That said, the Australian admitted that belief had been an issue for Munster’s players as the losing streak against Leinster continued.

“When you lose the number of games that we’ve lost to Leinster you start to doubt yourself, so that’s pretty much it in a nutshell,” said Larkham after confirming the province had discussed their belief levels at a team meeting yesterday.

“When you make a mistake, you get these thoughts popping into your head about potentially hanging on to that mistake for too long and forgetting about the fact that we are good, we are good enough to win this game. So just that belief in one another, and yourself, more than anything else.”

Presumably keen not to talk Munster down after another defeat to Leinster, Larkham insisted the final had been “fairly evenly matched” despite most commentators on the outside sensing that the 10-point margin hadn’t done justice to Leinster’s superiority.

Indeed, Stuart Lancaster said this week that “if you had been in the [Leinster] review, you’d probably have thought we lost really, given the opportunities I showed [the players]that we could have executed.”

Larkham had a different viewpoint on things as he flagged the positives. 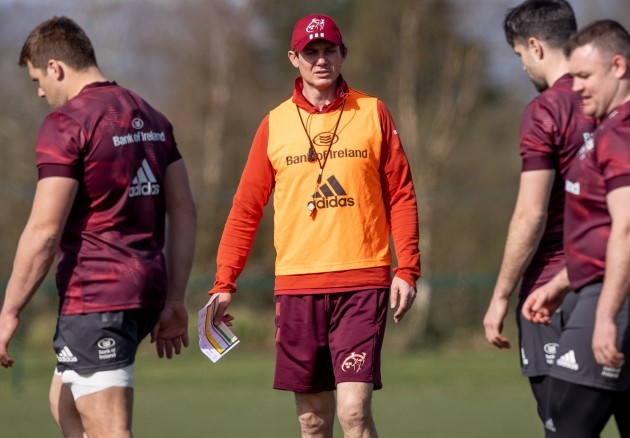 Larkham at Munster training this week.

“Then, defensively, outstanding scramble. We let a couple of clear and obvious linebreaks go through the middle of us, but the back three scrambled exceptionally well. I thought Keith Earls had an exceptional game on the edge, saving two or three tries down that edge on his own on the back of his scramble mentality.

“And then, if you look at some of those defensive passages, like Leinster are the best team in the competition clearly and they couldn’t get across our try line a number of times.

“We had zero significant passages inside their 22. They did a great job of keeping us out of their 22. Whereas they had significant ball time inside our 22 and our defence kept pushing them back.”

Larkham highlighted those individual errors as the reason for Munster’s inability to break Leinster down, but he also suggested that the victors had been even more error-prone in attack.

“If you look at it, Leinster had 45 possessions in the game and they made 14 errors with those,” said Larkham.

“So, it wasn’t the deciding factor in the game. Yes, we made mistakes as well, but there are other little fundamentals that we weren’t happy with.

“I am definitely not putting it down to individuals, there were certainly some great passages and some great individual carries and efforts out there on the field that you also need to recognise.” 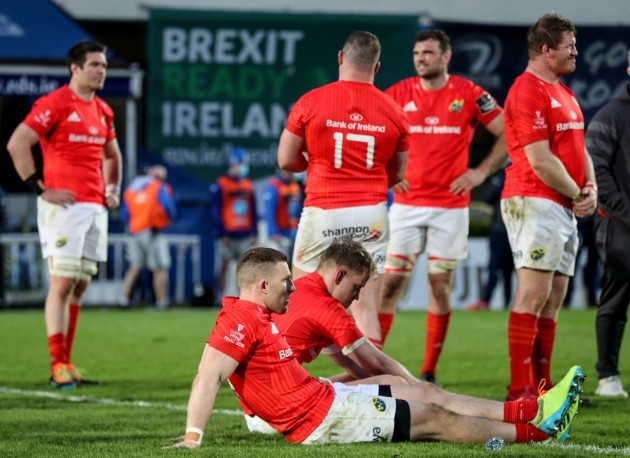 Munster must bounce back quickly.

Larkham’s view of the game being evenly matched is certainly very different to head coach van Graan’s post-match assessment that Leinster “are currently the best team by a mile.” So which is it?

“They are and I think after a game you’ve got to give credit to the team that played well and Leinster played well, there’s no doubt about that,” said Larkham when asked about the mixed messages.

“Leinster are ahead of us at the moment, but we’re fairly evenly matched. If you look at a two-horse race, the odds are not 100/1 against us.”

But what if Leinster had converted some of their clear try-scoring chances in the first half? The scoreline could have been very different in that case?

“Potentially, but then if we took some of our chances in the first half, it’s a different story as well,” answered Larkham. “We had a number of chances down that edge that we dropped.

“We were inside their 22 twice, CJ [Stander] got ripped and Mikey [Haley] lost the ball and they were promising phases for us with good numbers in front of us.

“So, yeah, you can look at all the what-ifs but realistically, it’s the end score which you’ve got to look at and they beat us by one try and a penalty but, realistically, it was the one try that really broke us.”