With Beirut once again blanketed in black smoke, Lebanese President Michel Aoun suggested that the latest fire in the city may have been the result of sabotage, and vowed to bring those responsible to justice. 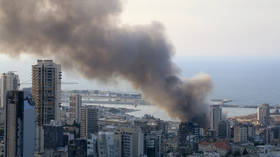 “Today’s fire may be an intentional act of sabotage, or the result of a technical error, ignorance, or negligence,” Aoun tweeted on Thursday. “In all cases, the cause must be known as soon as possible and the perpetrators held accountable.”

Aoun’s tweet came ahead of a meeting of Lebanon’s Supreme Defense Council. The meeting was convened after a massive fire engulfed Beirut’s port facilities, spewing black smoke into the sky and sparking panic among residents already shaken by a devastating explosion at the port last month.

As firefighters rushed to the scene, a Reuters source in the Lebanese military claimed that a stockpile of tires and oil had caught fire. Later on Thursday, Red Cross regional director Fabrizio Carboni said that the fire had destroyed a warehouse where the organization was storing thousands of food parcels and half a million litres of oil.

Shocking images from the port of Beirut. The warehouse on fire is where @ICRC_lb stocks thousands food parcels and 0.5 million L oil. The extent of the damage still remains to be established. Our humanitarian operation risks to be seriously disrupted.https://t.co/S6l6IA0bdz

Lebanon’s food supply was already jeopardized by last month’s explosion, which obliterated a row of grain silos and levelled the port, a critical piece of infrastructure through which more than two-thirds of the country’s imports and exports passed. With the damage from Thursday’s fire still unknown, Carboni said that the Red Cross’ humanitarian operation in the city could be “seriously disrupted.”

The huge explosion on August 4 – blamed on an improperly stored 2,700 ton stash of ammonium nitrate – killed 190 people and injured 6,000. It also toppled the government of Prime Minister Hassan Diab, who resigned along with his entire cabinet in the wake of the blast.

As flames billowed out of the port again on Thursday, newly-appointed Prime Minister Mustapha Adib was busy putting together a government under pressure from French President Emmanuel Macron. Diab, still in office in a caretaker capacity, told the Supreme Defense Council that he would launch an “expedited” investigation into the fire.

A probe into last month’s explosion has not yet released any official findings.