The UK city of Leicester may need to reintroduce previously lifted coronavirus restrictions, becoming the first city to do so, Home Secretary Priti Patel confirmed following media reports on the possible move. 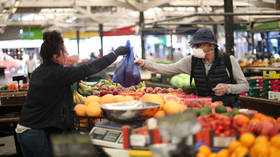 “That is correct,” Patel told The Andrew Marr show on Sunday morning when asked whether the government was considering a local lockdown. “We have seen flare-ups across the country already, just in the last three or four weeks in particular.”

The Times on Sunday earlier reported that Downing Street was examining ways to impose a local lockdown in the East Midlands city, which is home to around 340,000 people. The Leicester area has identified 658 new Covid-19 cases in almost two weeks since June 16.

Health Secretary Matt Hancock is “quite worried” about the new figures and is considering all options on the table, the newspaper said. A government source told the Times a lockdown may be ordered by the middle of next week.

After the story was published, the Department of Health said it was supporting “the council and local partners in Leicester” in their fight against Covid-19 and called on residents to practice social distancing. But the statement stopped short of either confirming or denying that a lockdown of the city was imminent.