While critics of US President Donald Trump gloated over the Supreme Court ruling in the matter of his taxes, another verdict returning much of Oklahoma to the Creek Nation has far bigger implications for the country down the line. 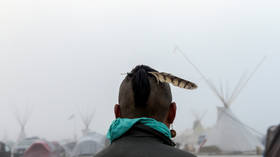 “On the far end of the Trail of Tears was a promise,” Justice Neil Gorsuch – a Trump appointee presumed to be a conservative textualist – declared at the start of the majority opinion in McGirt v Oklahoma, referring to the removal of Native Americans that began in 1831.

Gorsuch sided with the four liberal justices in ruling that a large portion of Oklahoma was in fact “Indian country” for the purpose of criminal law. The 1866 treaty made with the Creek – now Muscogee – still applied, even if the state has exercised jurisdiction there for over a century, they said.

“Because Congress has not said otherwise, we hold the government to its word,” Gorsuch wrote.

I guess these are the new borders of Oklahoma. pic.twitter.com/yCmbICBWHY

Much as with Gorsuch’s previous liberal crossover – in last month’s Bostock v Clayton County, where he reinterpreted “sex” to mean gender and sexual orientation – the justice admitted the ruling could have far-reaching consequences, but said this could be addressed by legislation and in further cases.

Noting that among the costs might be serious conflicts over jurisdiction, Gorsuch wrote that “Oklahoma and its tribes have proven they can work successfully together as partners” over time, so he saw no reason for pessimism.

Conservatives who championed Gorsuch’s confirmation back in 2017 were appalled. Senator Ted Cruz (R-Texas) declared that Trump’s first justice “gave away half of Oklahoma, literally,” adding that “Manhattan is next.”

Neil Gorsuch & the four liberal Justices just gave away half of Oklahoma, literally. Manhattan is next. https://t.co/Ic9gqqznJp

The Dutch who first settled the island that eventually became the heart of New York City said they had bought it from the Lenape tribe back in 1626. Their present-day descendants live in Oklahoma as the Delaware Nation.

NeverTrump critics reacted by gloating about Gorsuch’s “betrayal” of the president who nominated him, both in the Oklahoma case and in the matter of his tax returns – where he was joined by Trump’s other Supreme Court pick, Justice Brett Kavanaugh.

Betrayed by Gorsuch and Kavanaugh. #MAGA#KAG2020 Poor @realDonaldTrump…no one ever stands up for him. pic.twitter.com/85PZjwvhaM

Some African-American commentators noted the social justice language of Gorsuch’s opinion, speculating that it might pave the way to reparations for slavery.

The Muscogee themselves celebrated the outcome, with their ambassador Jonodev Chaudhuri declaring that “for once the United States is being held to its promises.”

“Despite a history of many broken promises, as is true with many tribal nations, the citizens feel uplifted that for once the United States is being held to its promises,” said Jonodev Chaudhuri, ambassador for the Muscogee (Creek) Nation. https://t.co/8Xgwc6QphH

The US government does have a long history of broken promises when it comes to treaties with Native American tribes, especially during the westward expansion that followed the 1861-65 Civil War.

Earlier this month, as Trump held a celebration of Independence Day at Mount Rushmore in South Dakota, his critics in the media suddenly remembered the Lakota. The tribe has long claimed that the mountain is part of their sacred grounds and has been defaced by the gigantic carvings of US presidents – now alleged to be “racist” – that they want removed.

Thursday’s ruling may even have bearing on Hawaii, as the islands’ monarchy was overthrown in a coup led by US citizens in 1893 and annexed five years later. The US Congress actually apologized for the annexation on the coup’s centennial in 1993, recognizing that the Hawaiians “never directly relinquished” their claim to sovereignty.

The precedent with such potential to unravel much of the fabric of the US originated with the complaint by Jimcy McGirt, convicted by Oklahoma authorities years ago of three serious sexual offenses against a child. He appealed, saying his crimes were committed on the Creek Reservation and only federal authorities could prosecute him as a result.