A huge blaze has erupted at a construction site in downtown St. Paul, the capital of Minnesota. The flames can be seen for miles and have been recorded by onlookers from all over the city center. 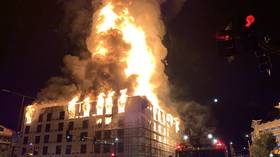 The city’s fire department tweeted that the crews on site had to spray the building from the outside “because of the advanced stage of the fire.” However, no one was inside the structure and no deaths or injuries have been reported.

Crews responded to a fire at a construction site near the @XcelEnergyCtr downtown @cityofsaintpaul at 4:20am. Firefighters fought the fire from the exterior because of the advanced stage of the fire. No injuries have been reported. The fire is under investigation. pic.twitter.com/kp0ofUZI2d

Huge fire in downtown St. Paul. Live report in minutes, and all morning on @[email protected]@MNewquistKSTPpic.twitter.com/NudwcX1Wh2

The building that caught on fire on Tuesday morning is a hotel with an apartment complex called ‘St. Paul Gateway Site.’ It is still under construction and is located near the Xcel Energy Center arena.

Authorities closed off several streets in the surrounding area, along with some intercity highways, due to the fire’s scale.

My mama just sent me this in her way to work 😟 #stpaulpic.twitter.com/kS2e2cANch

It is not clear what led to the fire, Mokosso said. The incident is being investigated.