At a rally by the black-only ‘Not F**king Around Coalition’ (NFAC) in Louisville, Kentucky, gunshots rang out and two people were wheeled off by medics. Early reports suggest one of the militia members shot himself by accident. 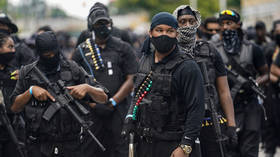 An all-black militia whose leader says he believes in violence to further the black cause, the NFAC gathered in Louisville, Kentucky on Saturday in full battle dress. Numbering more than a hundred, according to local reports, they demanded that the killers of Breonna Taylor – three police officers – be criminally charged.

There to meet them were the ‘Three Percenters’, a right-wing militia whose membership is mostly white. Police formed a line between the two groups.

Bout to be a militia showdown in Louisville pic.twitter.com/oDKlwX2xGU

When gunshots rang out over Baxter Park, however, they weren’t the first shots in a racial confrontation. Instead, they were accidental, and medics arrived moments later to wheel away two victims, reportedly NFAC members.

At the BLM #NFAC rally in Louisville one of the members accidentally shot themselves or another person. Hearing reports of possibly two injured. Seeing a lot of irresponsible things, people pointing weapons at each other 🤦‍♀️ pic.twitter.com/Q7b3rcaC7R

One person being carried out on a stretcher pic.twitter.com/0KM6BRtQwt

According to witnesses who described the scene on Twitter, an NFAC member accidentally fired his weapon, possibly injuring himself in the process. Police later said that three people were hit when the gun went off. In one live stream from the event, a woman could be heard off camera muttering: “This is f**king embarrassing.”

By early afternoon, local media reported that at least two people had been arrested during the day. Despite the earlier mishap, the NFAC formed columns and marched through the streets of Louisville as planned.

Screen grab from a news helicopter. The NFAC are getting ready to march. pic.twitter.com/NIm0h5msdx

The armed showdown came one day after police in Louisville arrested 76 protesters who blocked off a downtown street to hold a spontaneous block party. The arrests were made after the cops declared the demonstration an unlawful gathering.

‘Black Lives Matter’ protesters have demonstrated in downtown Louisville for nearly two months straight, calling on the police officers who shot Taylor to be fired and face criminal trial. The protests have already claimed two lives, most recently when a photographer was shot during a gathering at Jefferson Square Park in late June, and earlier when police returned fire after being shot at by a protester.