What is red, has a white and blue cross and may make people call you a racist? A Norwegian flag… which owners of a Michigan inn decided to pull down after too many people got angry, thinking it represented the Confederacy. 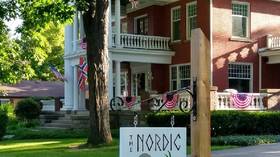 The decision to remove the Norwegian flag that flew in front of The Nordic Pineapple bed and breakfast in St John’s, Michigan, was announced by owner Kjersten Offenbecker last week. The flag was a tribute to her and her husband Greg’s ancestry and flew on the front pillar of their establishment opposite the US national flag since they moved in in 2018.

“This flag is so often mistaken for the Confederate flag and people are often offended by it before they realize that they are mistaken,” she wrote on Facebook, adding that she still intends to fly it on special occasions and maybe “find a less conspicuous place” for it.

“We love being members of the St. Johns community and are heartbroken to have had to make this decision,” she said.

The flag of Norway has the same red, white and blue colors as the Confederate flag, but features no stars and has a straight cross rather than a diagonal one. People confused about the nature of the banner have been confronting the Offenbeckers both in person and online, they told the Lansing State Journal.

The owners of the Nordic Pineapple never got any direct threats, but some people accused them of promoting racism, a notion they find particularly hurtful, as they’re raising two adopted black kids. So after receiving “at least a dozen hateful emails,” and twice as many rude comments, they decided enough was enough.

“It bugs me as far as the stupidity of people,” Greg Offenbecker remarked. “Even if the flag is blowing in the wind or laying limp, there are no stars on it. They look nothing alike.”

While the facade of the Michigan inn will hopefully no longer be triggering racism-sensitive visitors, the Norwegian flag remains part of its logo. It’s painted on a stylized Viking boat, which probably would help avoid any misunderstanding.

It’s not the first time the Norwegian national banner got mistaken for something else. Two years ago, bestselling true-crime author Rebecca Morris alerted the Seattle Times newspaper that she had seen a Confederate flag in her neighborhood. What the journalist found instead was a Norwegian-American homeowner showing the support of his Scandinavian country of origin during the Olympic games that were taking place the time.

The Confederate flag has long been controversial in the US, with many people calling it a symbol of hate and white supremacy. A campaign against things connected to the Confederacy and its pro-slavery past has escalated, in the wake of the nationwide protests against racism and police brutality triggered by the death of George Floyd during an arrest.