The University of Michigan at Dearborn has rushed to apologize after advertisements for white and non-white ‘cafe’ gatherings incensed the internet, baffling those who thought segregation was a thing of the benighted US past. 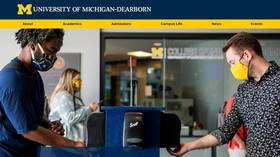 The university issued an apologetic yet extremely vague statement on Wednesday, claiming it “sincerely regrets the terms used to describe” the “virtual events” of the previous evening, insisting they “were not clear and not reflective of the university’s commitment to diversity, equity and inclusion.”

While the statement carefully avoided referencing the names of the offending events, plenty of social media users had screen-capped images advertising a pair of seemingly-segregated “virtual cafes” that had raised ire far beyond UMich’s student body.

. @UM_Dearborn is so woke that they created segregated cafes pic.twitter.com/FhAL0Av6ie

The “Non-POC Cafe” was described as “a space for students that do not identify as persons of color to gather and discuss their experiences as students on campus and as non-POC in the world.”

The complementary “BIPOC Cafe,” meanwhile, was “a space for student [sic]from marginalized racial/ethnic/cultural communities to gather and to relax with one another and to discuss their experience as students on campus and as people of color in the world.” Black, Indigenous and ‘People of Color’ students could even “hopefully brainstorm solutions to common issues within the BIPOC community.”

This de facto embrace of the kind of segregation that preceded the Civil Rights era was not lost on social media. Users did a double-take seeing the events were hosted by the so-called Center for Social Justice and Inclusion, even as the school’s defenders tried to point out the event was only virtual — not a case of two side-by-side brick-and-mortar cafes.

Star-bellied sneetches and sneetches without.“Then, of course, those with stars all got frightfully mad. To be wearing a star now was frightfully bad.” – Dr. Seuss https://t.co/tynN0acirG

Segregation does not equal Inclusion. Someone needs a third-grade vocabulary class. pic.twitter.com/gaBnkTXO3f

Respectfully, these are two separate forums for white people and non-white people to discuss racial topics. Not two brick and mortar coffee shops segregated based on race.Calling it a “cafe” is just branding- Awful, misleading branding that somebody needs to be fired for. pic.twitter.com/NaB6VXXdhy

Who would have ever thought that “Jim Crow was ahead of his time” would be thought by woke hipsters, but I guess this is 2020 after all

The university insisted in its subsequent apology that despite the names and descriptions, both events were “open to all members of the UM-Dearborn campus community.”

However, they also removed all traces of both events from their public website.

It’s not known if the events are meant to continue as UMich’s website initially promised. Both events were set to recur on the first Tuesday of every month “depending on feedback and demand.” It was unclear whether the backlash to this particular iteration of ‘woke segregation’ counts as either.