Jurors who heard the case of four activists who were invited by Caracas to protect the Venezuelan Embassy in the US capital – only to be nabbed in a police raid on the compound – failed to reach a verdict due to a hung jury. 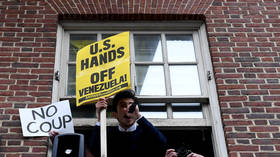 Four members of the ‘Embassy Protection Collective’ – Adrienne Pine, Kevin Zeese, Margaret Flowers, and David Paul – are each facing a year in prison and a $100,000 fine if found guilty of interfering with the US State Department’s attempt to seize the compound and hand it over to the “ambassador” of Venezuela, “appointed” by opposition leader Juan Guaido.

However, the jurors selected to hear the case apparently were not convinced by the regime-change narrative on Venezuela championed by the Trump administration and adopted by the prosecution team, and as the time came to deliver a verdict on Friday, they failed to do so.

Journalist Max Blumenthal, who reported from the courtroom, said that the prosecution put forward a series of dubious arguments – including that the Guaido-appointed “ambassador” was seeking a “return” of the embassy, despite the fact it had never been controlled by the US-backed opposition in the first place.

In closing rebuttal, the govt prosecutor stated that Guaido “ambassador” @carlosvecchio wanted the Venezuelan embassy “returned” to him – though he had never controlled it. The defense was not allowed to rebut this. Jurors have been subjected to a tidal wave of misinformation.

According to Blumenthal, Judge Beryl Howell, who presided over the case, argued that since Trump was president, it was his right to recognize or un-recognize foreign heads of state at will. Ironically telling the courtroom that “elections matter,” she appeared to ignore the fact that incumbent Venezuelan leader Nicolas Maduro was reelected for a second six-year term in May 2018, while Guaido – who declared himself ‘interim president’ one year ago – was ousted as the head of the opposition-led National Assembly last month in a vote by fellow MPs.

Judge Howell proclaimed today that “elections matter” – referring not to Maduro’s victory in 2018, but to Trump’s in 2016. She was defending Trump’s right to recognize anyone he wants as president of a sovereign foreign country, whether Mickey Mouse, Donald Duck or Juan Guaido.

With the jury unable to come to a consensus, a new trial date will be decided on February 28. It’s so far unclear whether the case will proceed at all, however.

The activists themselves, meanwhile, welcomed the news: “Needless to say, we are quite pleased with this outcome. #HandsOffVenezuela,” Adrienne Pine tweeted.

The development drew praise from 2020 Green Party presidential nominee Howie Hawkins, who commended jurors for standing up to the Trump administration push for the regime change in the Latin American country.

“It shows that the overreach in foreign policy of the Trump Administration is not popular among the American public,” Hawkins said.

Two of the activists, Zeese and Flowers, are prominent Green Party members.

The showdown at the embassy last May saw DC police armed with battering rams break into the compound with the last four activists holed up inside. In the run-up to the SWAT-style raid, US authorities cut water and electricity in the building in a bid to make the anti-coup activists surrender after spending over a month in the embassy. The activists insist they were there at the invitation of Venezuela’s legitimate government and have denounced the US takeover as a breach of the 1961 Vienna convention on diplomatic relations.