UK citizens are rolling their eyes at their government once again after it emerged that bars in the country’s parliament do not have to abide by the 10pm coronavirus curfew that’s in place across Britain. 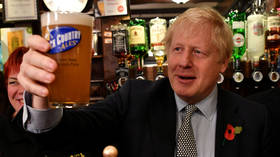 The Times reported on Monday that facilities serving alcohol in the Palace of Westminster are exempt from the freshly imposed curfew because they are classified as a “workplace canteen.”

The news sparked a fierce backlash, with numerous MPs blasting the decision. The outrage prompted parliamentary authorities to decide that alcohol will not be sold after 10pm. Five bars on the Westminster estate had reportedly been serving alcohol to MPs and other parliament workers.

The U-turn comes just a week after Prime Minister Boris Johnson introduced a raft of new measures in a bid to clampdown on the spread of Covid-19.

Along with the lack of curfew, staff and customers at the parliament’s bars did not have to follow stricter rules on face coverings that have been introduced for other licensed premises, and customers were also exempt from providing a name and contact number when they entered the premises.

“We must all obey the rules” update pic.twitter.com/WgmiKQkWsr

The new restrictions were met with dismay in the hospitality sector, with spokespeople warning they will be a death knell for the many businesses that have been crippled by the pandemic.

The revelation that the rules didn’t apply in Westminster provoked a swift backlash from a British public that appears to be increasingly infuriated by its government’s inept handling of the public health crisis.

The phrase “Animal Farm” trended on Twitter in the UK, as numerous people noted that the double standards were reminiscent of George Orwell’s classic allegory.

Alexander de Piffel and his new cabinet enjoying a pint after 10PM at a private table in the Houses of Parliament Bar.(Watching Orwell’s “Animal Farm” unfold in realtime is really something) pic.twitter.com/DJr39sRxE8

It honestly feels like watching Animal Farm play out in real life. #coronaviruspic.twitter.com/vZGmxzW1D4

Many also joked that pub landlords will be diligently examining regulations in a bid to have their premises classified as workplace canteens.