The South African is adamant that his team can reach the next level.

THEY HAVE LOST five semi-finals and a final on his watch. Or, if you are Johann van Graan, a different way of looking at things is to point out that since he replaced Rassie Erasmus as head coach, Munster have recorded victories over Leinster, Saracens, Racing 92, Exeter Chiefs, Leicester, Castres and most memorably of all, Toulon and Clermont.

If that gives credence to his belief that they ‘are at that level’, well it is easy to see things from the South African’s perspective. However, plenty of people doubt if they really are capable of beating Europe’s elite, pointing to the trophy cabinet which remains bare.

Big wins have come in Europe; but there has also been plenty of heartbreak, against Racing 92 in the 2018 semi-finals, against Saracens at the same stage a year later, against both Racing and Saracens in last year’s pool stages and now Saturday: a 40-33 defeat to Toulouse.

“We have had a superb season with 16 wins out of 20 games,” said Van Graan afterwards, “and what we saw out there was a magnificent game of rugby, some of the best we have seen in the competition thus far.”

It’s becoming a familiar story. Year after year, Munster have shown their capacity to compete with the best, and aside from Saracens’ 32-16 win in the 2019 semis, no team has run away from them.

But there is a problem. Racing, the new and improved Toulouse, and Leinster, are on a higher level and no matter how much they try to join them, Munster just can’t bridge the gap between competing, and beating, the best in the games that really matter.

“We are improving every single season,” their coach said, and of course he is right. Three years ago, when he walked into the lecture theatre at the club’s UL training complex, he could have pointed to where Munster were two years earlier, when their 2015/16 European season ended in January and a sixth-place finish in the Pro12 left them without knockout rugby for the first time since 1997-98.

Instead he talked ambitiously about the future. “If you really want to be the best team in the world, as we aspire to be, then you need to improve everywhere,” he said that afternoon.

To be fair, they have got better. But to be blunt, those in Europe’s top tier have improved much more. No1 side in the world? Munster aren’t close to replacing Leinster as the No1 team in Ireland.

“The frustrating thing is we’re so close every single time,” he said. “We gave it our best shot and we came up short on Saturday. That happens in sport, it’s certainly no excuse from my side; we’ve got to improve again. 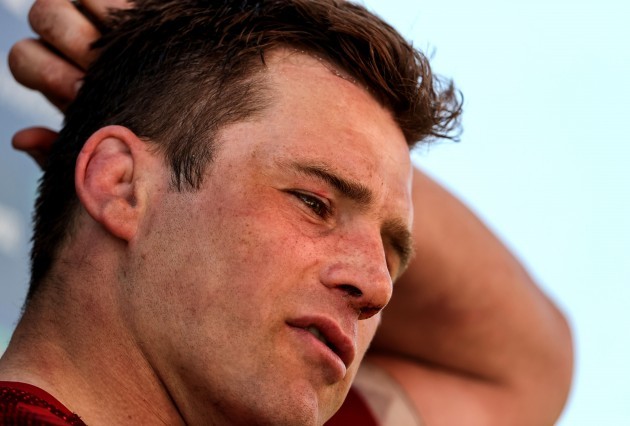 CJ Stander after the game.

“In terms of alignment from an organisation point of view, from a coaching group, from a players’ point of view, we’re all aligned and we’re going to keep improving. We believe that the best is yet to come.”

The Rainbow Cup offers the next opportunity to prove that but it was refreshing to hear the coach talk instead about using that competition to rotate his squad and experiment to some degree. Long-term, they’ll be the better for that policy. Van Graan also said we ‘might’ see RG Snyman at some stage between now and June. “I don’t want to speculate on his return date but it will be great to have him back on the pitch.”

Captain Peter O’Mahony seems set to miss out for another three weeks with a leg injury and you can’t help wonder how Munster would get on against Europe’s best if they were ever able to get their best 15 out on the field.

Certainly on Saturday they did plenty right. A week earlier, in their Pro14 final loss to Leinster, the narrative focused more on all the things they did wrong.

“Every single game is different. Leinster squeezed us whereas Saturday was a much more open game; they were perfect conditions out there. Last week there was a lot of wind so you adapt according to each individual opponent.

“Unfortunately we came up short last week. Yes, there was a lot of criticism from certain guys, but we believe in the guys that are in here and we believe in what we are doing.

“We believe we are improving but we just have to start again and go again.”

Asked if he also believed Munster had the players to reach that stage, he simply replied ‘yes’.

They have to wait until next year to prove that point.