Johann van Graan’s side are chasing a first trophy since 2011.

A LEINSTER WIN against Munster today would represent the province’s longest winning run against their greatest rivals. That is the uncomfortable fact facing those who will be wearing red at the RDS.

Should Leo Cullen’s side come out on top in this evening’s Pro14 final [KO 5pm, eir Sport/TG4], they will make it six wins on the bounce against Munster, something which has never happened before.

Stats and figures never tell the full picture, but a record like that would not sit well alongside Munster’s assertion that they are a team heading in the right direction.

Johann van Graan arrived in Limerick in 2017, and leads the team into a first final under his stewardship today. There have been great wins and plenty of highs during that time, but this is his best opportunity yet to finally put something concrete to his reign as head coach.

It is well and good to talk about things like progress and belief, but it’s far better to put those words into action.

So why will Munster go into this game with genuine confidence that this time, they will come out on top?

For a start, their key men are in form. Keith Earls was superb for Ireland in the wins over Scotland and England, Tadhg Beirne is playing some of the best rugby of his career, CJ Stander has been rock solid at number eight while Conor Murray looked assured and vibrant last weekend.

Joey Carbery’s return to the game has been hugely promising, and he starts against his former employers today on merit. There is absolutely no doubt that he still possesses that priceless ability to turn a game on its head in an instant.

The impending exits of Stander and Billy Holland should also not be underestimated. We saw the impact Stander’s retirement announcement had on the Ireland team last week. This squad will be desperate to send them out on a high, and if a group ever needed inspiration, they could do a lot worse than look to those two warhorses. 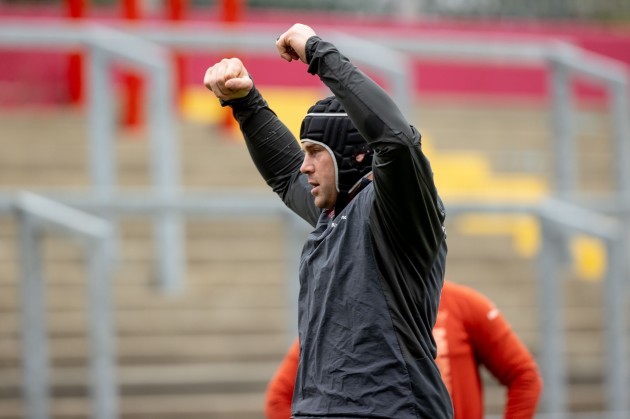 CJ Stander during training this week.

More important than any of that though, is that Munster now look genuinely good enough to beat Leinster. In previous meetings the expectation has been that while Van Graan’s side would bring plenty of heart to the battle, they would struggle to match their more illustrious opponents for a full 80 minutes, and this will again be a real challenge given the strength sitting on the Leinster bench.

This season has been a significant one in Munster’s development, however. Graham Rowntree has had the time to put his stamp on the pack while their gameplan has clearly evolved under the guidance of Stephen Larkham. With that comes a hardened belief that they are never out of the fight – that remarkable comeback against Clermont in December the most obvious case in point.

This is a team that truly believes they can beat anybody, in any circumstances, and certainly one that will fancy their chances against a Leinster team who feel they can afford to keep some key players in reserve with an eye on next weekend’s Champions Cup fixtures.

Whatever way you look at it, Leinster need to dig a little deeper for motivation.

They have won this tournament the last three seasons running, often at a canter, and have decided they are good enough to make it four-in-a-row even with Johnny Sexton, Tadhg Furlong, Jamison Gibson-Park, Ryan Baird and James Lowe – whose defensive shortcomings are never as big an issue in the Pro14 – starting on the bench. There is a strong chance all five of those players will be restored for the visit of Toulon next Friday. There’s your teamtalk sorted, Johann.

The team Cullen has selected is still a strong one, but once again it is a desperate look for the Pro14 with so many headline attractions left out of the first XV. James Ryan, Garry Ringrose, Will Connors and Scott Penny – the league’s joint-top try-scorer – all miss out with injury, but you wonder if they would have played even if fit. 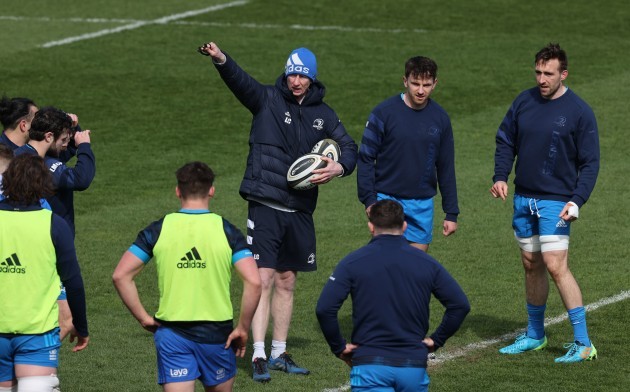 And even taking all that into consideration, it is hard to look past Leinster. Their backline is bursting with talent, with Hugo Keenan, Dave Kearney and particaulry Robbie Henshaw all playing superb rugby.

Even more formidable is the Leinster pack, and this could be the key difference between the sides.

Munster’s front five collectively need a massive display to keep on top of that battle, with Furlong and Baird poised to come in and see out the game for the hosts.

The back row match-ups look a more even contest, and Munster’s combination of Gavin Coombes, Peter O’Mahony and Stander will relish the prospect of pitting themselves against the Leinster selection of Rhys Ruddock, Josh van der Flier and Jack Conan.

If Munster’s forwards can get on top, their backs will need to be brave in their attack and take their chances when they come – something which has cost them in previous meetings. Players like Carbery, Andrew Conway and Mike Haley have all shown they are just as capable of opening a game up as any of their Leinster contemporaries.

The prize at stake is far more than a shiny piece of tin.

A win today could act as the spur for a golden new era at Munster. After years of being an obvious second best in Irish rugby, they finally appear to be closing that gap.

A first trophy in 10 years would be a perfect springboard for the next stage of this team’s development, one that will be powered by the likes of Carbery, Coombes, Damian de Allende, Craig Casey and, hopefully, RG Snyman.

For Leinster, the prize on offer is a reinforcement of the belief that they remain streets ahead in this league before they quickly turn their attention to reclaiming the Champions Cup.

Even with stars like Sexton, Toner, Fardy and Healy entering the latter stages of their careers, this squad’s future looks secure as that steady crop of young talent continues to trickle into first team with little issue.

They have won these games pulling up before, but Munster now have the talent and gameplan to challenge their dominance of this competition.

And after last year’s damp squib final in the Aviva Stadium, the hope is that the occasion lives up the hype.

That has not always been the case with this fixture in recent years, but given the named sides we should at least expect a close, competitive encounter between two teams who will firmly believe they can make a real statement in this rivalry.

Murray Kinsella, Bernard Jackman and Gavan Casey field listeners’ questions about Ireland’s victory over England before turning their attention to the club game, and Super Rugby in the Pacific Islands, prospective law trials up north and, of course, this weekend’s Pro14 final between old rivals.