As part of its upcoming Perseverance mission payload, NASA is sending a meteorite fragment known as Sayh al Uhaymir 008 AKA SaU 008, back from where it came some 600,000 years ago: Mars. 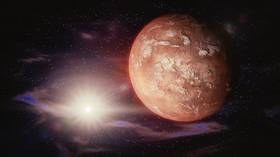 The 2020 NASA Perseverance rover mission is scheduled to lift off on Thursday, weather permitting, and the probe will use SaU 008 as a reference point for local geology to calibrate its sensors upon landing.

This particular piece of rock actually left Mars roughly half a million years ago, having been ricocheted off the planet by a comet or asteroid strike. It wandered the barren wasteland of space before finally crashing down to Earth 1,000 years ago, only to be discovered in Oman in 1999.

“It formed about 450 million years ago, got blasted off Mars by an asteroid or comet roughly 600,000-700,000 years ago, and then landed on Earth; we don’t know precisely when but perhaps 1,000 years ago. And now it’s going back to Mars,” Caroline Smith at the Natural History Museum in the UK said.

Tiny gas bubbles trapped inside the rock perfectly match the atmospheric conditions on the Red Planet, so a small sliver of the stone is going to be mounted onto the SHERLOC (Scanning Habitable Environments with Raman and Luminescence for Organics and Chemicals) spectrometer.

SHERLOC will be testing a total of 10 materials exposed to the Martian atmosphere via laser analysis, including a contender for future spacesuit fabric.

“The SHERLOC instrument is a valuable opportunity to prepare for human spaceflight as well as to perform fundamental scientific investigations of the Martian surface,” says SHERLOC co-investigator and curator of extraterrestrial materials Marc Fries, from the Johnson Space Center.

“It gives us a convenient way to test material that will keep future astronauts safe when they get to Mars.”

The mission is set to touch down at the 49-kilometer (30-mile) Jezero crater in February 2021. A livestream of Thursday’s launch can be viewed here.