France and Turkey are at loggerheads over Libya. After a confrontation between their navies off the coast of the country, France is now calling Ankara’s “hostile and unacceptable” behavior an obstacle to peace. 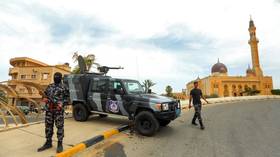 Though it was a NATO bombing campaign that reduced Libya – once an oil-rich and prosperous nation – to rubble and civil war, the alliance is split on how to rebuild the shattered country. Turkey backs the UN-recognized Government of National Accord (GNA) in Tripoli, while France claims to be a neutral party in the GNA’s war against the Tobruk-based Libyan National Army (LNA).

“Turkey’s support for the ongoing offensive of the Government of National Accord goes directly against efforts to secure an immediate truce,” von der Muhll said in a statement. “This support is coupled with hostile and unacceptable behavior by the Turkish maritime forces towards NATO allies, aimed at hampering efforts to implement the United Nations arms embargo.”

Earlier, French officials accused a Turkish ship of engaging in threatening behavior, then of hiding its details when queried by a nearby French vessel. The French accused the crew of transporting weapons to Libya – a move that Ankara denied, saying that the French had attempted to search its ship in international waters, which was “not permitted.”

Both sides will have an opportunity to hammer out – or to deepen – their differences later on Wednesday and Thursday, as the alliance’s defense ministers meet via video call. Turkey has also clashed on a NATO defense plan for Poland and the Baltic states, with a group of diplomats telling Reuters that Turkey is refusing to back the plan unless the alliance recognizes Kurdish militias in Syria as terrorist groups.