Some of the top journalist-activists covering Belarus in English on Twitter are now working for organizations that defend the interests of Western arms manufacturers – with no disclaimer for their followers. 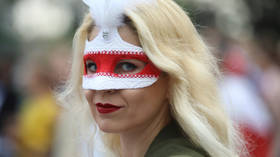 On Wednesday, the Center for European Policy Analysis (CEPA) – based in Warsaw, Poland and Washington, DC – announced it was “thrilled” to welcome Tadeusz Giczan as a fellow. He has previously worked with NEXTA, described as “Belarus’s largest Telegram channel.”

We are thrilled to announce @TadeuszGiczan is joining CEPA as our new fellow focusing on Belarus! Tadeusz has done incredible work covering events in Belarus with @nexta_tv and brings his expertise on the country’s inner workings to CEPA at this crucial moment.Welcome Tadeusz!

CEPA further praised Giczan for doing “incredible work covering events in Belarus,” referring to weeks-long protests that have tried to overturn the result of the presidential election. From the very beginning of the revolt against President Alexander Lukashenko, NEXTA has openly sided with the demonstrators.

The London-based, Minsk-born, Polish-educated Giczan looks to be the perfect fit for CEPA, which “believes that the strategic theater encompassing the region between Berlin to Moscow, and from the Barents Sea to the Black Sea, represents an area vital of strategic interest to the United States.”

Why, exactly, the territory claimed by the old Polish-Lithuanian Commonwealth and the ‘Intermarium’ project championed by Warsaw between the world wars is vital to the US is never fully explained. That hasn’t stopped CEPA from receiving funding from the US State Department, regime-change specialists at the National Endowment for Democracy, weapons makers such as Lockheed Martin, Raytheon, and Bell – or NATO, for that matter.

Giczan is not the only activist-journalist-expert on all things Belarus to make the jump from social media activism to the think-tank world. Two other major voices have done so over the past month, landing at CEPA’s cousin the Eurasia Center, a subset of the Atlantic Council.

The Atlantic Council is the pre-eminent NATO think-tank championing the idea that Russia is an existential threat to Europe and the US, in order to justify NATO’s reason for being long past its Cold War expiration date. Now it has enlisted in its ranks Hanna Liubakova and Franak Viačorka, two influential online voices on Belarus.

Liubakova is described as a former journalist with Outriders, an “international multimedia platform” run out of Poland. Viačorka, meanwhile, contracted with the US Agency for Global Media – USAGM,  the official propaganda arm of the government in Washington – and was the “creative director for the Belarus service of Radio Free Europe/Radio Liberty (RFE/RL).”

Obviously, the journalists/activists concerned are entitled to make a living, and fair play to them for getting paid work. But what’s notable is NATO’s interest in supporting those framing the narrative out of Belarus. Given the EU publicly says its interest isn’t geopolitical.

It is unlikely this exodus to think-tank-land was driven by Lukashenko’s government revoking the credentials of journalists working for Western outlets, on grounds that they allegedly fomented unrest. Not the least because that decision came down on August 29, four days after Liubakova made the jump to the Atlantic Council, and two weeks after Viačorka had done so, on August 14.

What’s even more interesting is that they sought refuge in the arms of NATO, which claims to be entirely uninvolved in the events in Belarus. Yet here is the alliance’s narrative-shaping arm, eager to “amplify the voices” of journalist-activists cheering on Lukashenko’s opposition.

Last but not least, while social media platforms like Twitter have in recent weeks labeled outlets like RT, Sputnik and Xinhua as “state-affiliated,” the same standard was not applied to British, German, French or US outlets controlled and funded by their governments, including Viačorka’s former employer, USAGM.

Nor has Twitter compelled the disclosure that the “think tanks” now amplifying activist takes on Belarus have a direct interest in stoking tensions in Eastern Europe in order to boost NATO’s presence, as well as weapons sales, in the region.