The A&E TV network has seen its viewership dive bomb after dropping its popular cop-based reality show ‘Live PD.’ Though the woke move decimated its prime time audience, the channel insists the decline is only “temporary.” 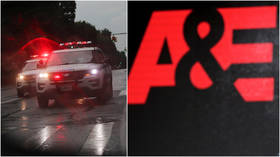 Some six weeks after A&E shelved the show – which followed on-duty police officers on patrol in real time – the network’s prime time viewership has tanked by 49 percent, according to Nielsen ratings data first reported by the Wall Street Journal on Friday. Its total daily average viewership collapsed by more than a third.

Though the network labeled the drop as a “temporary hit in the ratings,” the impact has been even greater for a key adult-aged demographic, declining 55 percent for those aged 18 to 49.

A&E’s decision to cancel the show last month came amid a wave of anti-police brutality demonstrations, which erupted nationwide following the death of George Floyd at the hands of law enforcement in May. At the time, the company said it would “determine if there is a clear pathway to tell the stories of both the community and the police officers whose role it is to serve them,” noting it would meet with “civil rights leaders as well as police departments” as it reassessed the show.

‘Live PD’ also spawned a number of spin-off shows, all of which were scrapped along with the original series in June. Together, the shows made up 85 percent of A&E’s programming during some weeks.

The cancellations have not gone over well with the show’s large fanbase, however, with former viewers taking to social media to demand a revival of the series, some even encouraging a boycott of the channel. A&E has apparently not ruled out bringing the show back, telling the Journal that it is “continuing to listen to both community leaders and ‘Live PD’ fans to find a way to serve both moving forward.”

The hit TV show was not the only cop-themed program to get the axe in recent months, with the Paramount Network giving the pink slip to its iconic ‘Cops’ series in June, which ran for a whopping 32 seasons.

The onslaught on police-themed shows even triggered a semi-sarcastic rumor that the children’s cartoon ‘Paw Patrol’ was next on the chopping block – a claim echoed in seriousness by the White House spokeswoman as recently as Friday afternoon. A Nickelodeon spokesperson has since dispelled the idea, reassuring its audience the show isn’t going anywhere.