Amazon has again found itself amid a swirl of controversy, after online shoppers spotted that the e-commerce giant has been selling a pair of brown shoes that used the N-word to describe their color. 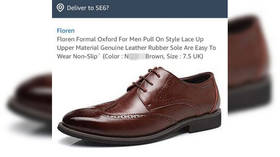 The leather Florence Shakespeare brogues were available in a range of colors, including “N****r brown”. Extraordinarily, in this age of extreme political correctness, the racial slur had appeared uncensored on the online store’s platform since March.

The rest of the description featured a range of grammatical and spelling errors, but broadly read like a normal shoe ad. “Occasion: Whether you are working, driving, wedding, Business or other casual lifestyles it is a great choice to wear,” the first line read. “Formal Oxford for men pull on style lace up upper materiel genuine leather rubber sole are easy to wear non-slip,” it added.

Just buying brown brogues tonight leads to this racist micro aggression. Is it 2020 or 1720? Please ⁦⁦@amazon⁩ take it down. pic.twitter.com/kQGAxe1yMW

Unsurprisingly, Amazon has faced a barrage of criticism about the offensive listing. UK Labour Party politician David Lammy was among those who took aim at the tech giant. “Just buying brown brogues tonight leads to this racist micro-aggression. Is it 2020 or 1720? Please, ⁦⁦@amazon – take it down,” he wrote.

The outcry quickly saw the shoe advert stripped from the website, and Amazon reminded all sellers that they must follow its selling guidelines in order to offer their wares on its platform.

However, Lammy was among those who weren’t satisfied with the mere removal of the product. He asked the company via Twitter how the N-word was ever allowed to appear on the site in the first place, and then to go unchecked for several months.

“Thank you, @amazon, for taking this down now, but, given the item has been on sale since March, what systems do you have in place for reviewing descriptions and not allowing offensive terms to be posted in the first place? This is not the first time,” he tweeted.