Conservative Trump critic George Conway has earned unlikely love from Democrats due to his frequent Twitter bashing of the president. Yet, his praise for SCOTUS nominee Amy Coney Barrett now has liberals frothing with rage. 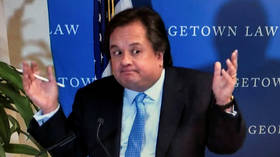 As one of the founders of the anti-Trump ‘Lincoln Project’ – a group of disaffected Republicans that regularly produces ads slamming the president – George Conway has become a darling of the liberal #Resistance. The fact that his wife is none other than former Trump counsellor Kellyanne Conway only heightened his standing as a man of integrity among the left. The division of the Trump presidency, they argued, even touched the families of his aides.

Along the way, the fact that George Conway’s entire career was spent as a conservative constitutional lawyer was seemingly forgotten. Until, that is, he tweeted his support for the nomination of Amy Coney Barrett to the Supreme Court on Saturday.

Conway said there is “not a chance” that any Republican senators would vote Coney Barrett down, calling her “eminently qualified to serve on the Supreme Court.” Pressed on his words by journalist Natasha Stoynoff, he added “there’s no reason to doubt her fairness or integrity.”

Twitter liberals recoiled in disgust. “Hate to say I told you so on George Conway,” wrote feminist activist Amy Siskind. “Don’t know why people fall for this shit.”

Hate to say I told you so on George Conway. Don’t know why people fall for this shit. pic.twitter.com/9z5Ram0JVx

George, you just shot yourself in the foot. Seriously?

Some Trump critics on the right also took a stand against their fellow ‘Never Trump’ conservatives who are opposed to Coney Barrett, arguing that defeating Trump “and his band of enablers at the ballot box” should be the movement’s only aim. Coney Barrett’s experience and merits, to them, take second place to ousting Trump from power.

George Conway is a conservative— I don’t understand why people are getting upset that he supports a conservative judge. Our mission as Never Trump Republicans is to help defeat Trump and his band of enablers at the ballot box.Not good, guys.

The Republican-held Senate has enough votes to confirm Coney Barrett, yet Democrats have fiercely protested her nomination, which comes just five weeks before this year’s presidential election. Moreover, liberals have claimed that Barrett would rule against the constitutional right to abortion, based on her refusal to count Roe v. Wade – the landmark 1973 case that established this right – on her 2013 list of “super precedents” – cases that the court should never overturn.

Critics also argued that Coney Barrett would likely rule the Affordable Care Act, also known as Obamacare, unconstitutional. Trump himself fueled their arguments on Sunday, tweeting that he would replace the 2010 act with something “MUCH better, and FAR cheaper… if it is terminated in the Supreme Court.”