A new method of blood testing has proven up to 10 times as sensitive as current methods in detecting the presence of cancer, potentially paving the way for at-home pin-prick tests to monitor patients. 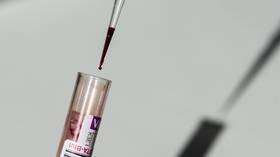 New research led by the University of Cambridge explored a new method of personalized genetic testing of tumors that can determine the success of an ongoing course of treatment as well as the likelihood of a future relapse.

Using the method, doctors can sift through blood samples for hundreds of different genetic mutations in the DNA released by the tumor into the bloodstream.

Strides in data analysis have also improved the clarity of the information that can be collected from a sample. This has further refined the technique and allows it to deliver remarkable testing sensitivity that can detect one mutant DNA molecule among a million, representing a 10-fold improvement on current methods.

“Personalized tests that can detect if cancer is still present, or find it early if it’s returning, are now being tested in clinical trials,” said Dr Nitzan Rosenfeld, senior group leader at the Cancer Research UK Cambridge Institute, who led the team that conducted the study.

The researchers admit that the test is still several years away from clinical use, but it’s already a highly promising proof of concept. The technique is an advanced form of what is known as a ‘liquid biopsy’, which precludes the need for invasive surgery to accurately profile a patient’s cancer.

In certain situations, liquid biopsies can detect some cancers before patients even show symptoms. However, the researchers say that using a traditional liquid biopsy is like looking for the proverbial needle in a haystack.

Using this new method, however, not only increases the number of needles that can be found, but may also eventually reduce the size of the ‘haystack’ to perhaps just a single drop of blood, equating to fewer hospital visits for patients and more frequent monitoring of their condition, which could mean the difference between life and death in terms of treatment decisions.