New York Attorney General Letitia James has recommended police disengage from “any type of routine traffic enforcement activity” to avoid potential showdowns with non-compliant drivers as they might end up in violence. 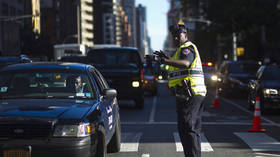 James suggested police take a hands-off approach when patrolling traffic, discouraging officers from stopping drivers for violations that do not involve criminal conduct, in a statement on Friday.

The recommendation came as James’s Special Investigations and Prosecutions Unit (SIPU) released a report on the death of Allan Feliz, who was fatally shot by a police officer after he was pulled over for a suspected seatbelt violation.

While James said that she found “no criminal culpability” in the officer’s conduct in that case, she noted that since such stops “can result in violent interactions,” it’s better to “remove NYPD officers from engaging in routine traffic enforcement altogether.”

She also suggested pulling the plug on the NYPD policy of arresting motorists for unrelated offences during traffic stops.

To the extent the NYPD continues to be involved in traffic enforcement, the NYPD should direct its officers not to arrest motorists for open warrants related to minor offenses.

James’ proposal has triggered pushback online, with critics arguing that it is “how a lot of criminals get captured,” including those wanted for felonies.

Not going to happen bc a lot of simple traffic stops lead to felony arrests, gun and drug seizures! This is how a lot of criminals get captured.

Others argued that the taming of police powers has gone too far, and that a next logical step would be to ban officers from making arrests altogether.

I’m on board with this one! Cancel speed limits!

The Feliz case unfolded during a similar routine traffic stop in October 2018. At the time, Feliz produced the driver’s license of his brother, Sammy, which apparently set off a series of unfortunate events.

Officers, who believed at the time Allan was Sammy, discovered three open warrants on Sammy’s name – for disorderly conduct, spitting and littering. Officers asked Feliz to exit the vehicle and subjected him to a pat-down. At one point during the check, Feliz “stepped back into the vehicle, began to pull the door closed, and reached for the gearshift,” apparently attempting to flee, the report states.

Feliz repeatedly ignored orders to get out of the vehicle, prompting one of the officers, Sgt. Rivera, to fire a stun gun through an open window of the car. It eventually came to a scuffle between Rivera and Feliz inside the car, during which they grappled for control of the gearshift. At one point in the altercation, the car jerked several feet forward and then backwards, nearly hitting Rivera’s partner, Edward Barrett. Shortly after that, Rivera lost sight of Barrett, believing he had been run over and that “any further movement of the vehicle, either forward or backward, would put Barrett’s life at risk.” At that point, Rivera shot Feliz in the chest, who died on the spot, according to the report.

The SIPU went on to state that it’s impossible to prove beyond a reasonable doubt that the use of deadly force by Rivera was unjustified.