US regulators have revoked emergency approval for the use of hydroxychloroquine to treat Covid-19. Doctors will still be able to prescribe the drug, recently taken by President Donald Trump himself, for off-label use. 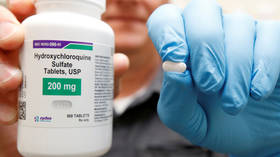 Citing the “totality of scientific evidence available,” Food and Drug Administration (FDA) Chief Scientist Denise M. Hinton wrote on Monday that it was “no longer reasonable to believe” that hydroxychloroquine (HCQ) and chloroquine (CQ) may be effective against the novel coronavirus, as outlined in the emergency authorization EUA 039 from April 2020.

While admitting that not enough research has been conducted on the drugs’ effectiveness, the FDA argues that, based on the studies so far, the treatment doesn’t work to reduce the viral load in Covid-19 patients. Two early studies observing viral shedding have “not been consistently replicated” by later research, Hinton’s letter said.

“Recent data from a large randomized controlled trial showed no evidence of benefit for mortality or other outcomes such as hospital length of stay or need for mechanical ventilation of HCQ treatment in hospitalized patients with [Covid-19],” Hinton wrote.

Among the studies looked at by the FDA was the controversial one published in Lancet last month, which was later retracted due to problems with the data. Hinton says the agency disregarded the study from the final analysis.

Instead, the letter cited “persuasive evidence of a lack of benefit” coming from the RECOVERY study, a randomized trial sponsored by Oxford University in the UK, which gave HCQ to 1,542 patients out of 11,000 volunteers and ended on June 5.

CQ and HCQ have been used for decades to treat malaria, lupus and rheumatoid arthritis, with known side effects such as arrhythmia, low blood pressure and muscle or nerve damage. The FDA admitted it had very limited data on the incidence of side effects among Americans treated with the drug – 1,762 HCQ treatments, out of 2.4 million seven-day courses dispensed from the Strategic National Stockpile as of May 22.

Trump brought up HCQ back in April as one possible treatment for Covid-19, and last month he revealed he was taking the drug himself, as a prophylactic. Several individuals have come forth to credit the drug with their recovery from the coronavirus. The medical and media establishments have been overwhelmingly hostile to the drug, however, citing its potential dangers and going so far as to assert it “will kill you.”

Covid-19 patients can still receive HCQ and CQ under ‘off-label’ usage rules, but the FDA does not recommend their use at hospitals outside of clinical trials.

As yet, there is no FDA-approved treatment against Covid-19. So far, over 2.1 million Americans have tested positive for the coronavirus, and almost 116,000 have died.