A British Conservative MP has urged the government to draft in the armed forces for the rollout of a mass coronavirus vaccination program, which would include mandatory certificates that allow people to travel internationally. 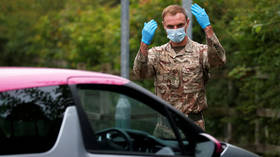 Speaking in the House of Commons on Monday night, Tobias Ellwood argued that the mass vaccination scheme is a challenge of the scale and complexity of “the D-day landings and Dunkirk.”

The MP for Bournemouth East told the parliament that a vaccine could be six months away and urged Prime Minister Boris Johnson to use the armed forces to oversee the process of delivering it to the UK population.

“Mass vaccine rollout is an enormous responsibility, and we need to get it right,” Ellwood said. “I stress that there is huge scope for this to go wrong if we do not start to plan now,” he added.

The politician told the House that he has written to Johnson urging him to use the Ministry of Defence and the army to set up regional distribution hubs as well as to develop a “national database to track progress and issue the vaccination certificates.”

Ellwood, who is Chair of the House of Commons Defence Select Committee, said that vaccination certificates “will probably have to be internationally recognized in order to allow travel, international travel.”

In further eyebrow raising remarks, Ellwood outlined that life will return to normal for those who get the vaccine, whereas those who don’t will still be “subject to social distancing rules.”

“I believe that the biggest challenge will be in managing the transition period – potentially up to a year – when parts of our society have been liberated from the threat ​of Covid-19 and seek to return to normality, but those who have yet to be vaccinated are still subject to social distancing rules,” he said.

Share. Twitter Facebook Google+ Pinterest LinkedIn Tumblr Email
Previous Article‘I cannot even begin to put into words what he was like when he lost his temper, it was ludicrous’
Next Article WATCH The 2020 Presidential Debates: Everything You Need To Know About The First Faceoff