Twitter has again slapped a “manipulated media” tag on a tweet from US President Donald Trump – a meme video mocking CNN – prompting cheers from the #Resistance, which apparently missed what many saw as an “obvious joke.” 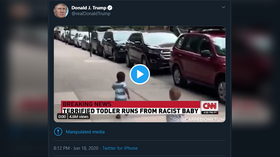 Shared to Twitter by the president on Thursday evening, the post played off an old viral video showing two toddlers, one black and one white, as they run to embrace one another. Parodying the adorable clip, Trump’s tweet features a mock CNN chyron captioned “Terrified toddler runs from racist baby.”

Twitter, however, apparently decided that netizens would have a hard time telling actual CNN news coverage from the satirical clip, warning users that the video may have been “manipulated.”  Indeed.

According to the platform’s guidelines, the flag indicates that the content might have been “deceptively altered or fabricated.”

Following the tag, Trump’s critics ran a victory lap – or several of them – declaring the post another example of ‘fake news’ endorsed by the commander in chief, presumably taking the video to be a sincere effort to doctor a CNN broadcast (it would seem that Twitter knows its audience, after all).

Honestly @jack should flag it because that’s a fake cnn chyron.

CNN itself was not in the mood for a laugh either, with the broadcaster’s communications department penning a harsh rebuke to Trump for “tweeting fake videos that exploit innocent children,” arguing that the network did, in fact, cover the toddler story “exactly as it happened.” At least now we know.

CNN did cover this story – exactly as it happened. Just as we reported your positions on race (and poll numbers). We’ll continue working with facts rather than tweeting fake videos that exploit innocent children. We invite you to do the same. Be better. https://t.co/T1nBtejZta

The comedy also appears to have been lost on CNN employees. Without missing a beat, one commentator with the network, Keith Boykin, ‘fact checked’ the post with a straight face, also accusing the president of “exploiting” the children in the video and spreading misinformation.

You accuse CNN of running a fake video of black and white children hugging in the street, but CNN actually ran the real video of these kids back in September. You’re the one spreading fake news. And exploiting these children for your political benefit.pic.twitter.com/9Ky5y6Nyin

A number of netizens soon countered the critics, pointing out that the post was intended as a joke, some voicing disbelief that it was portrayed as anything else, and at Twitter’s drive to “protect” the internet from humor.

“Who believes he’s seriously accusing CNN of running a story[?]” one user asked, arguing the video was a “gag at CNN” meant to show “how everything has turned into an issue of racism.”

Dear @jack:@Twitter’s Censorship Department is at it again—slapping another warning label on a tweet by President ⁦@realDonaldTrump⁩.It’s PARODY. A JOKE.You don’t need to “protect us” by censoring conservatives w/ whom you politically disagree. https://t.co/taxt9e0PXR

I’m so glad Twitter informed me that this video wasn’t actual footage from CNN. Without that warning, we all would have just assumed it was real. https://t.co/J3V6IuvLEl

One commenter cried hypocrisy, showing that actual doctored images were left unflagged in replies directly below Trump’s tweet – the only difference being that they were critical of the president.

They put “manipulated media” on an obvious joke, meme video… but not on the photoshopped, racist leftist garbage that is in your face right under it, that is actually “manipulated.” Hmm pic.twitter.com/KRW8hezz5d

The satire video was not the first Trump tweet flagged by the platform, with a number of his previous tweets and retweets also deemed misinformation or hate speech. In the latest incident, during intense unrest and rioting in Minneapolis sparked by protests over police brutality, the president was said to have “glorified violence” when he observed that “when the looting starts, the shooting starts.”