Norway is halting its Covid-19 tracking app and will delete the data it has already collected after the country’s data protection watchdog criticized its continued use amid privacy concerns. 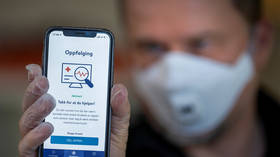 The Norwegian Data Protection Authority said on Friday that it was no longer reasonable to collect data through the app considering the low spread of the infection and concerns about privacy. It gave the Norwegian Institute of Public Health (NIPH) notice of its decision to put in place a temporary ban on processing personal data.

The Smittestopp app was created in a bid to limit the spread of the coronavirus but the data watchdog believes its use is no longer appropriate given the low-levels of the virus in the Scandanavian country. The app has been downloaded 1.6 million times and has 600,00 active users, according to NIPH figures.

“We don’t agree with the DPA’s evaluation, but feel it is necessary to delete all data and put work on hold as a result of this,” NIPH’s director Camilla Stoltenberg said on Monday. She added that this would “weaken an important part of our preparedness against a spread in infection, as we now lose time for development and testing of the app.”

Norway is among a number of countries to roll out controversial contact tracing apps in a bid to tackle the pandemic, including Australia, France, Iceland, India and Singapore, while other countries like the UK are yet to launch their own planned contact tracing systems. The apps use Bluetooth to connect with other phones that have the software installed. The data collected is then used to let people know when they’ve been in close contact with someone who tests positive for the coronavirus.

The technology has sparked data privacy concerns, with many pointing to the risks of surveillance, data leaks and the information being stored for longer than necessary. France’s StopCovid app caused a standoff with Apple, which refused to change settings to allow the government app to access users’ Bluetooth so that it would always be switched on. A number of European countries like Germany are using systems developed by Google and Apple, despite the privacy concerns about relying on US tech companies.

In the UK, Serco, one of the companies behind the country’s upcoming Covid-19 tracing programme, suffered a data breach that leaked nearly 300 users’ details. Junior health minister Edward Argar is a former Serco lobbyist, the Guardian reports. The CEO of the NHS scheme, Tony Prestedge, told staff that the programme would be “imperfect” when it launches.