Rumors that the National Football League plans to play the ‘black national anthem’ before games once it returns have failed to please anyone, with people either considering it divisive or not going far enough to fight racism. 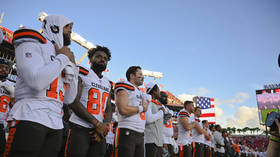 The NFL plans to have ‘Lift Every Voice And Sing’ performed live or played before every Week 1 game, ESPN reported on Thursday, citing “a source familiar with the league’s discussions.”

The move would be just one of the measures Commissioner Roger Godell is considering to raise awareness of “systemic racism.” Other contemplated moves include listing the names of African Americans killed by police on players’ uniforms, and producing educational programs.

Far from pleasing the social justice activists, however, the rumored move was condemned as a meaningless gesture in face of concrete demands. One prominent #Resistance activist even demanded the song should continue being played after the first week and that former player Colin Kaepernick – who started the trend of kneeling for the US national anthem – needs to be hired by a team.

The NFL playing “Lift Ev’ry Voice And Sing” (aka the Black National Anthem) is a meaningless gesture if:1) Colin Kaepernick remains unsigned2) the league does anything but support players who #TakeAKnee.3) it’s only played before Week 1 games. https://t.co/hn3NdlUuk2

Meanwhile, conservative pundits and activists were outraged by the notion of a “black anthem,” arguing that the ‘Star-Spangled Banner’ represents all Americans and describing the rumored NFL stunt as an unwelcome “push to re-segregate our society.”

so the division continues I see. The left and the enlightened ones among us are continuing the push to re-segregate our society. I’m sorry, the Black National Anthem will be played at NFL games? Really? The actual national anthem doesn’t cover all people? Fill me in.

Written in 1900 and set to music in 1905, ‘Lift Every Voice And Sing’ was described as the “negro national hymn” by the National Association for the Advancement of Colored People (NAACP) in 1919. A portion of it was recited at the inauguration of President Barack Obama in 2009, and it was performed at the opening ceremonies of the National Museum of African American History and Culture in 2016.

Musician Rene Marie caused a scandal in 2008, when she was asked to perform the ‘Star-Spangled Banner’ at an event in Denver but used the words of ‘Lift Every Voice And Sing’ instead.

Social justice activists have developed a grudge against the US national anthem in recent years, objecting to a seldom-used verse about a “hireling and slave” as well as the fact that its author, Francis Scott Key, had been a slave owner.

A precedent for using ‘Lift Every Voice and Sing’ ahead of the national anthem has already been set, when NASCAR used portions of it at the opening of the Pocono 350 race on June 28 in Pennsylvania. Prior to that, the stock car league called in the FBI to investigate claims that a “noose” had been planted in the garage of African-American driver Bubba Wallace. The FBI concluded it was a door pull and no hate crime had been committed.