Proposals under consideration today include fully vaccinated people no longer having to restrict their movements after being identified as a close contact. 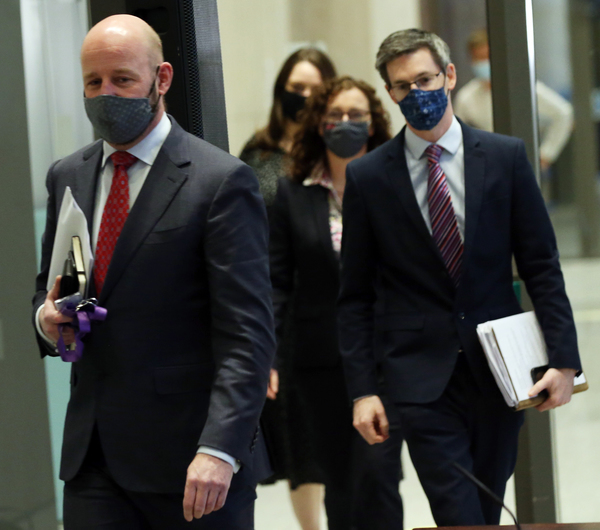 NPHET will today consider advice around testing in schools and will assess the current trajectory of the disease.

PROPOSALS FOR DEALING with healthcare workers who refuse to be vaccinated will be discussed by the National Public Health Emergency Team [NPHET] when it meets today.

NPHET will also consider advice issued by Ireland’s Expert Advisory Group regarding duration of immunity to Covid-19 as well as additional freedoms for people who are fully vaccinated.

The Government last week agreed that two people who have been fully vaccinated could be allowed to meet indoors or outdoors.

Full protection is not in place for vaccinated people until it has been at least two weeks since they received a second vaccine dose.

Proposals under consideration today include fully vaccinated people no longer having to restrict their movements after being identified as a close contact as well as a review of policy in other countries when a healthcare worker refuses a vaccine.

Ahead of all remaining second level students returning to in-school education on 12 April, NPHET will also consider advice around testing in schools and will assess the current trajectory of the disease.

Cases have remained steady for a number of weeks but health officials remain concerned about the effect the easing of restrictions from next week could have.

As of 8pm last night, 220 Covid-19 patients are hospitalised – the same figure as 24 hours previously.

A total of 54 of these are in intensive care units, of whom 33 were being treated on ventilators.

On the vaccine front, the latest figures show that, as of 4 April, 936,087 doses of Covid-19 vaccine have been administered in Ireland:

People aged 65-69 are in Cohort 6 of the government’s prioritisation list, after those with underlying health conditions.

HSE Paul Reid said yesterday that the booking process will involve people registering their details online and being texted their vaccine slot, with some receiving their vaccines that week.

He said the HSE “will have to deal with some exceptions” for people who don’t have access to the internet and that those people will be dealt with “through a separate process”.

Of those who book their vaccination online, most will receive their shots in vaccination centres.

The Department of Health, meanwhile, has released official vaccine supply projections for April, May and June.

It is estimated that 3.9 million doses will be delivered by 30 June and with the Department providing a breakdown of supply by manufacturer for the first time.

Separately, all three teachers’ unions have passed a motion calling for prioritisation in the vaccination programme and a ballot for industrial action, including strike, if the government does not meet their demands.

The three unions – the Irish National Teachers’ Organisation (INTO), Association of Secondary Teachers Ireland (ASTI) and Teachers’ Union of Ireland (TUI) – had agreed to table a joint motion on the issue at their annual conferences, which began yesterday.

The motion also demands early vaccination within the overall cohort of education staff of pregnant teachers, those in higher risk categories and those who work in special schools, special classes and home school community liaison teachers.

If the government does not agree to prioritise teachers in the programme by the end of the current school year, the motion mandates a ballot of members for industrial action up to and including strike.

Minister Foley told Morning Ireland the decision to shift to an age-based vaccine roll-out was not “a value judgement” on any profession but based on the available science.