Dozens of voters in the NYC borough of Queens have received military absentee ballots, despite never having served. While the Board of Elections has insisted the ballots are “correct,” some fear their votes could be challenged. 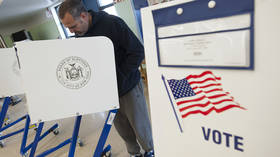 Reports from concerned Queens civilians who’d received forms labeled “official absentee military ballot for the general election” began proliferating on social media over the weekend. They may have gone out to everyone in the borough who requested an absentee ballot, according to a Monday report from the New York Post – which has seen several of its own reporters receive them.

We also received ballots that read “Absentee Military Ballot” here in Sunnyside. We knew right away it was a significant problem. I wonder how many have been sent out in Queens. People may try to vote with them – I mean, they do read ‘official absentee ballot.’ This is concerning pic.twitter.com/7yKXZAYw6j

So, my absentee ballot says “MILITARY” and apparently this is happening all over Queens. Not sure I want to risk my vote not being counted because BOE sent out the wrong forms… @[email protected]://t.co/kXEdiuXxtZpic.twitter.com/7Qy9WyiLQP

While the city Board of Elections has denied a mix-up, instead blaming a typographical error, many who received the ballots fear their votes might be thrown out on a technicality.

Sunnyside city councilman Jimmy Van Bramer told the Post that about a dozen of his constituents had contacted him for advice about what to do with the seemingly-mistaken mailing. “It appears that everyone has gotten this particular ballot,” he said, suggesting the early reports were “just the tip of the iceberg.”

Yes, this is the correct ballot, even if you are not serving in the military.

While the NYC Board of Elections responded to one Queens resident’s Twitter query, confirming it was “the correct ballot, even if you are not serving in the military,” it has not issued a public statement about the ballots on its own Twitter feed (never mind the usual publicity channels). However, a BOE spokesperson confirmed to the Post that the ballots were legit, explaining the confusion stemmed from a typographical error in which a hyphen between “military” and “absentee” was not printed and insisting the ballots are the same for military and absentee voters.

Despite these attempts at reassurance, the New York State Board of Elections was not pleased to learn of the mistake. Co-chair Doug Kellner pledged to look into the matter, acknowledging that “there are lots of questions of whether there is adequate quality control” at the city BOE.

The seemingly-minor typo could come back to haunt absentee voters if the ballots are challenged after Election Day, and voters already on edge due to the political firestorm that has erupted around mail-in ballots don’t need more reasons to distrust the system. Last month, it emerged that a quarter of mail-in ballots cast by New Yorkers during the 2020 primary were disqualified for reasons that were largely the fault of the city’s Board of Elections and the US Postal Service.

A coalition of voter rights groups sued the city BOE following 2016’s disastrous Democratic primary after it emerged that 200,000 registered Democrats had been purged from voter rolls without warning in advance of the vote – tilting the primary heavily in favor of Hillary Clinton. The Board quietly settled the lawsuit, admitting it had broken both federal and state election laws, but the “reforms” it agreed to were nominal at best and the plaintiffs in the lawsuit warned local media there was nothing to prevent a repeat.

Last week, nine mail-in military ballots were found discarded in Luzerne County, Pennsylvania. Seven of them had been marked for President Donald Trump, who has loudly warned that a mail-in election is likely to bring unprecedented levels of voter fraud.